The most energetic flares often start with the rising motion of a filament followed by magnetic reconnection below this filament. The start of the reconnection corresponds to the beginning of the flare impulsive phase. While this impulsive phase has been studied in many papers, the very early phase just after the start of the filament rise and before the impulsive phase is still not well understood. This is due to the fact that this phase is usually short. However, in SOL2011-06-07, associated with the the ejection of an unusually huge filament, this pre-impulsive phase was rather long and enabled us to recognize several phenomena that were not observed up to the present.

At the very beginning of the flare we found an unusual radio continuum emission whose starting boundary drifts from high to low frequencies (Figure 1). The emission starts at 870 MHz at about 06:21:40 UT, but at 300 MHz it starts at about 06:24:20 UT, thus giving the mean drift of the edge (the emission onset) of about -3.6 MHz/s. Assuming that this continuum is generated by the plasma emission mechanism on the fundamental frequency, and using a model of coronal density, the velocity of the agent generating the starting boundary of this continuum is about 400 km/s. This velocity is comparable to that of the filament itself, 200-400 km/s (Ref. [1]). Therefore, we propose that this continuum comes from the rising magnetic flux rope in which the filament is embedded. 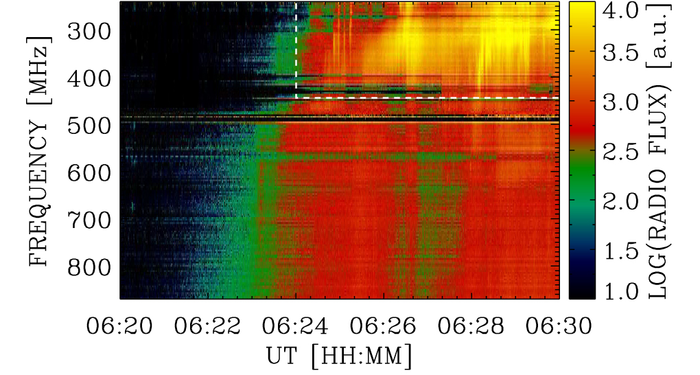 Figure 1: The radio spectrum observed on 2011 June 7, showing an unusual continuum which starts at 870 MHz at about 06:21:40 UT and whose starting boundary drifts from high to low frequencies. This emission is followed by the drifting pulsation structure (DPS) observed in the 220-450 MHz range at about 06:24:15-06:30 UT (see the box delineated by the dashed line).

The rising radio continuum is followed by a "drifting pulsation structure" (DPS; see Ref. [2]). This appeared in the 220--450 MHz range and at about 06:24:15--06:30 UT (Figure 1). Such a DPS is proposed to be a signature of the plasma emission from the plasmoid located in the rising magnetic flux rope. Note that this particular DPS is observed at very low frequencies; usually, they are observed in the GHz frequency range (Ref. [3]). It seems that this may be connected with the eruption of an unusually huge filament. In this case the magnetic reconnection generating the plasmoid and DPS started when the upper part of the magnetic rope, carrying the filament, reached a very high coronal altitude. Because the plasmoid density depends on that of the surrounding plasma, it was lower than usual and thus the plasma emission frequency from the plasmoid (the DPS frequency) was also unusually low. This interpretation is in agreement with observations of the X-ray source (plasmoid) at the upper part of the filament just at the start of DPS (Figure 2). 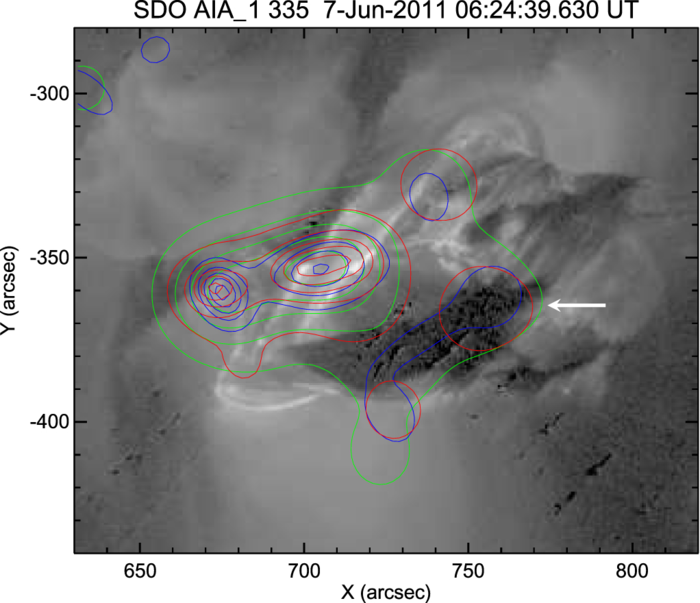 The light curves in X-ray, EUV, and 3 GHz radio emissions all indicate quasi-periodic oscillations in the pre-impulsive phase of the flare. For spectral analysis of the observed periodicity, we used the wavelet AMPLITUDE spectra instead of the well known wavelet POWER spectra. The advantage of the wavelet amplitude spectrum is that it shows not only the periods, but also the phases of these periods. For comparison of oscillation phases in different light curves we used also the wavelet cross-correlation spectra. Using these techniques, we detected ~30 s quasi-periodic oscillations simultaneously in all of these disparate wavebands (Figure 3) during the filament rise at about 06:22-06:25 UT. The half-periods of oscillations, shown as bright and dark patches in this figure, almost coincide in time for different energy ranges (radio, X-ray, EUV). In the global wavelet spectra, peaks in periods above the 95 % significance level were found at ~ 33 sec (radio), ~ 25 sec (X-ray), and ~ 28 sec (EUV). There was also a periodicity drift toward shorter periods with increasing oscillation power. Furthermore, wavelet cross-correlation spectra showed that the signals with the ~30s period in radio, X-ray and EUV are in phase. 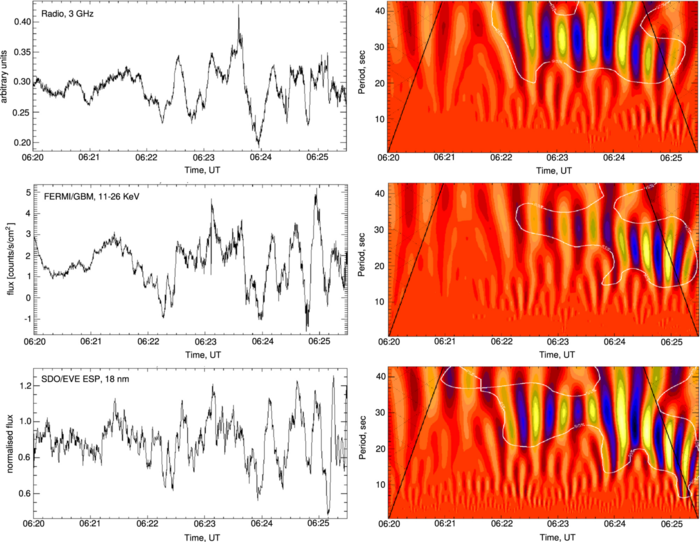 The detected oscillations could reflect fast kink-mode oscillations (Ref. [4]) or an oscillatory acceleration/injection process caused by oscillation of the magnetic loop interacting with the rising magnetic rope where the filament is embedded (Ref. [5]). Through these interactions (inducing magnetic reconnection) electrons could be accelerated and cause the quasi-periodic variations in the observed hard X-ray, EUV, and radio gyro-synchrotron emission. It appears that oscillations end due to a much stronger process (magnetic reconnection below the rising filament) in the flare impulsive phase.