Soft and Hard X-rays, Flares, and the Corona

This Nugget further discusses the remarkable GOES database of solar soft X-ray fluxes, but at the opposite end of the activity spectrum from the previous Nugget. Here we are interested in the quiet Sun, and specifically in understanding the relationship between the diffuse hot corona seen outside active regions, and the soft X-ray emission from the quiet Sun.

In stellar astronomy the X-ray luminosity (LX), and its ratio to the total luminosity, plays a central role in defining a star's coronal structure. The GOES data provide a measure of the solar LX, but for historical reasons this measurement is at a higher photon energy than for typical measurements of stellar X-rays. That can make comparisons a little tricky. It is important for us to study the Sun in ways that allow us to compare with the stellar data, though, since the basic physics may reveal itself more clearly with the advantage of the stellar differences of mass, composition, age, rotation rate, effective temperature, etc. - the Sun is unique.

Soft X-ray images, such as the iconic one (Figure 1) from Yohkoh/SXT show the X-ray corona to have a very large image dynamic range. Even outside coronal holes, so-named because of their blackness in the original Skylab images, the diffuse global corona is much fainter than the active regions. That is why nonlinear scaling is invariably used to represent such images. 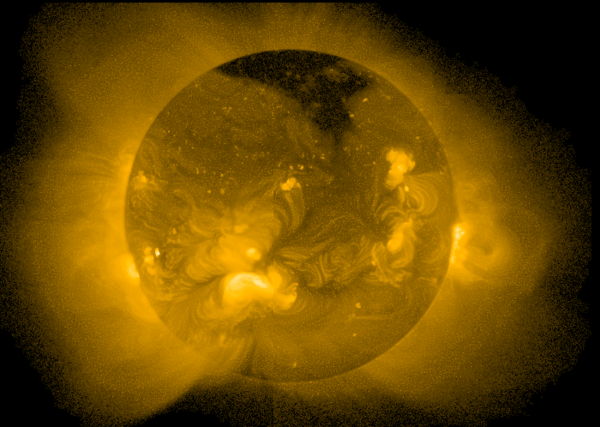 Figure 1: The classic full-resolution soft X-ray image from Yohkoh/SXT, from 8 May 1992. Non-linear image scale makes the faint features visible here, as well as the bright ones.

This image is a snapshot, and movies of the corona show that it has ceaseless activity. But not quite ceaseless, because on larger spatial scales the structures seem remarkably stable with time. The spatial structure of the coronal variability has considerable significance for our understanding of the underlying plasma physics. The best and most detailed views of this variability now come from the extreme ultraviolet via the Solar Dynamics Observatory; these views closely reflect the basic X-ray emission from the hot corona.

The X-ray variability of the Sun as a star

How do we characterize the variability of the solar corona. If the Sun were a star, we would just have instantaneous spectra at whatever wavelength and resolution we could achieve. For the Sun, we can also make wonderful images at almost any wavelength, and Figure 1 is a splendid example of what the Sun looks like at non-standard but very informative extreme wavelengths. But let us consider only the stellar analog here, the whole-Sun flux, and let us use the GOES soft X-ray data to do that. As noted above, the wavelength range of the GOES sensors emphasizes the thermal emissions at higher temperatures than those of the quiet corona. The two three-day samples of GOES time series in Figure 2 illustrate the range of what we see: the Sun is hardly detectable at its faintest time, and so we only really get lower limits on the range of variability, many decades.

From Figure 2 we could readily conclude that the solar soft X-ray emission consists entirely of flares during high activity, but that there is a base level of quiescent emission when sunspots are few. This background level would often be called a "basal" emission level. Is that what GOES is seeing? To clarify this we have made an effort to characterize the lower envelope of GOES signal. Others have often done this, and Figure 3 shows the result of just taking the minimum hourly value for each day during the on-duty time range of the X-ray photometers on GOES-15.

Figure 3: Daily values of the GOES "basal" flux for five years around the sunspot maximum of Hale Cycle 24. The red points just note the days when this basal flux fell below the GOES B1 level.

Note that Figure 3 just shows data from the years of solar maximum in the current sunspot cycle. Even during this time (see Figure 3, left panel) there are intervals of near-constancy on longer time scales. Is this a trace of high-temperature emission from the diffuse global corona, at times when the active regions produce negligible flux? At earlier dates, the GOES sensors tend to "bottom out" nonlinearly, and so this question cannot be answered directly. It is a bit risky to judge the answer to this question from these data, since there is so much variability - much less that the flare-like variations, but still a range expressed in decades. Part of the problem lies in the sensitivity of the sensors, but the more important part is the wavelength range. If one observes X-rays at 2 keV, roughly speaking, one is looking at the extreme tail of a thermal spectrum from a million-degree plasma - some 20 times kT!

Thus the natural thing to do is to push the observations to longer wavelengths, as well as greater sensitivity. The student microsatellite SNOE did this, as reported in Ref. [1]. Ref. [2] describe harder X-ray observations with much greater sensitivity from the SphinX experiment, which took place during the dead solar minimum of 2008. As with the left panel of Figure 2, the SphinX data show periods of steady emission. Based on these data, as well as this glimpse from GOES, we think that the answer to the question ("Can we see the quiet solar corona as an X-ray source?") is Yes.

This Nugget has described how the quiet Sun appears in currently available X-ray data. The time-series view strongly suggests steady heating, rather than the episodic flare-like heating one sees at higher levels of activity, where hot flaring active regions dominate. This is not the end of the story, though; the heating could still be episodic, but just with more frequent episodes of weaker events. The detection of basal emission by GOES at its relatively high energies ("hard X-rays", to a non-solar astronomer), might suggest something like this. More sensitive hard X-ray observations, preferably with focusing optics, will resolve this question once and for all.

Retrieved from "https://sprg.ssl.berkeley.edu/~tohban/wiki/index.php/Soft_and_Hard_X-rays,_Flares,_and_the_Corona"
Category: Nugget
Facts about Soft and Hard X-rays, Flares, and the CoronaRDF feed