Solar relativistic particle events or Ground Level Enhancements (GLEs) are the relativistic counterparts of solar energetic particle (SEP) events. They are detected by the network of ground-based neutron monitors, and sometimes by "muon telescopes". GLEs are always accompanied by energetic flares and CMEs, which can both accelerate particles either by various types of electric fields produced during reconnection or by Fermi processes at shock waves. 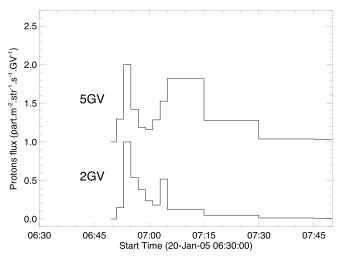 Figure 1: Time histories of relativistic solar protons at two different rigidities, as detected by the Earth-based array of neutron monitors.

In order to constrain the acceleration regions of relativistic particles and their propagation from the Sun to to the Earth., one can try to compare the timing of the energetic particle fluxes at Earth with the timing of coronal dynamical processes in the associated flare and CME. But most GLEs travel through a highly disturbed interplanetary magnetic field (IMF). Particle scattering in the perturbed fields smears out acceleration signatures and induces delays in the travel time of relativistic particles during their interplanetary propagation. This makes it difficult to link the time profiles detected at Earth to the solar activity accelerating the relativistic particles.

The well-structured and weakly-scattered GLE on 20 January 2005, associated with the flare SOL2006-01-20, is a most favourable event for a detailed comparative analysis of the signatures of energetic particles using multi-instrument observations. Using 40 different neutron monitors around the Earth, we derived the proton flux and its angular distribution of the GLE on 20 January 2005 at the top of the Earth's atmosphere. Figure 1 displays the proton flux at a kinetic energy of about 4 GeV and 1.27 GeV, which is near the maximum of the response function of a neutron monitor. The time profile of the protons is well structured. The first peak presents a rapid increase and a short duration, suggesting an acceleration or a release of relativistic particles within 2-3 minutes at most. The second peak has a longer duration, which suggests an increase of the interplanetary scattering or a time-extended acceleration.

The study of the gamma-ray, hard X-ray and microwave signatures of energetic particles in the chromosphere and the low corona (Figure 2) gives information on particle acceleration during the associated flare.

These four time profiles are also very well structured, and each profile presents several peaks during the impulsive phase. While the emission mechanisms, e.g. of electrons at microwave and hard X-rays, are different, the common time structures point to a common evolution of the energetic particle populations – in this case electrons from some tens of KeV to several MeV. These structures in the time profiles led us to define several time intervals corresponding to different episodes of particle acceleration. 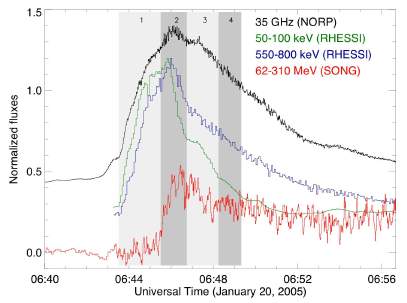 Figure 2: Radio, X-ray, and gamma-ray observations, as labeled. The vertical strips show different episodes of particle acceleration in the flare.

Figure 2 identifies four episodes of acceleration by vertical grey stripes numbered 1 to 4. The detailed study of the two hard X-ray profiles in the 50-100 keV and 550-800 keV range, suggests that more high-energy electrons are accelerated during the second episode of acceleration of the impulsive phase, reflecting spectral hardening in time (the "soft-hard-harder" pattern).

The spectral analysis of the gamma-ray emission (red time profile of Fig. 2) suggests that the emission is dominated by the decay of neutral pions, implying that protons have been accelerated to energies above 300 MeV. We notice that the emission starts during the second episode of acceleration.

In summary: the most energetic protons (> 300 MeV ) and the most energetic electrons are accelerated during the second episode of acceleration of the impulsive phase, a few minutes after the onset of the hard X-ray and microwave emission. This is a well-known result for the high-energy gamma-rays that was already found in the SMM era.

The dynamic radio spectrum at decimetre and longer wavelengths, displayed in Figure 3, gives evidence on the escape of particles from the low to the high corona, and eventually to interplanetary space. The emission is generated by electron beams of some keV to a few tens of keV that propagate outward along open magnetic flux tubes, producing type III radio bursts. As they proceed to greater heights, i.e. lower ambient electron densities, the emission frequencies become ever lower. This is a very interesting tool for probing magnetic structures in the corona that cannot be seen otherwise, because the plasma density is too low for significant EUV or X-ray emission. For when the particles are injected into closed structures, they will generate an emission that does not continue beyond some minimum frequency. This is what the spectrum shows: the radio emission of the first-injected electrons does not continue below abut 35 MHz, but turns over! These radio-emitting electron beams propagate in extended, but closed loops. However, a few minutes later the first type III bursts appear between 1 and 14 MHz. This is consistent with an injection of electron beams in open field lines.

While the emission comes from electrons, the underlying magnetic structures are relevant to the propagation of protons as well. The similarities between the time profile of the first injected electron beams at 14 MHz and the time profile of protons, especially the similarly steep rise, suggest that the relativistic protons detected at Earth travelled through the corona together with the radio emitting electron beams. 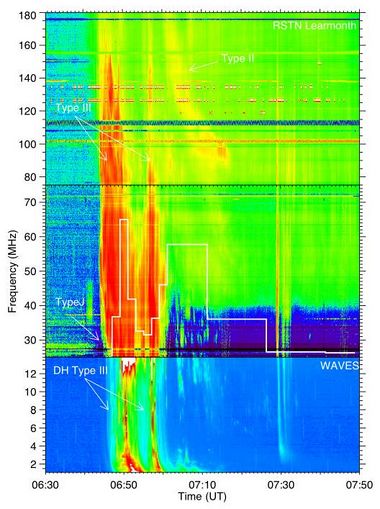 Figure 3: Radio dynamic spectrum of the flare, with a superposed white histogram showing the 5 GV proton time profile. The higher frequencies correspond to lower altitudes, and drifting bursts of type II and type III are marked.

The first proton peak, being weakly-scattered, matches very well the first group of type III bursts. This is of course so by construction as far as the onset is concerned. But both peaks also have comparable duration, confirming the common release. The detailed comparative analysis hence shows a consistent timing : the very energetic particles accelerated during the second episode of acceleration in the impulsive phase, both electrons and protons, have an instantaneous access to the IMF together with energetic electron beams.

This suggests that both interacting and escaping relativistic protons are accelerated in the flaring region. These may be revealed in the imaging observations of hard and soft X-rays by RHESSI, which show the typical pattern of hard X-ray footpoints on top of flare ribbons. These are linked by the soft X-ray structures, which are reminiscent of the common reconnection scenario of particle acceleration in flares in the low corona.

The GLE presents a second peak of relativistic protons. We notice in Figure 3 that its onset coincides with another group of type III bursts, while the prolonged tail is accompanied by type II emission between 75 and 180 MHz from a coronal shock wave. The frequency range of this emission indicates that the shock wave is within a solar radius above the photosphere, well behind the front of the CME observed just before by SoHO/LASCO (cf. Pohjolainen et al., 2007). The shock waves producing this type II emission is not the bow shock of the CME.

Using multi-instrument observations of a well-structured GLE, we established that the coronal acceleration history of interacting and escaping high-energy particles during the 20 January 2005 flare and CME is more complex than a simple scenario of a delta-function acceleration in an impulsive flare and time-extended acceleration at the CME shock. We suggest that the initial acceleration of relativistic particles detected at Earth is directly related to this structured impulsive phase, and occurs with a delay of a few minutes after the first hard X-ray and microwave signature of electron acceleration during the flare.The detailed analysis suggests that the first peak of relativistic particles is accelerated by reconnection processes in the low corona, whereas the second peak appears to be related to a shock in the low corona, which can play the role of the scattering process for flare-accelerated particles or the accelerator of the second peak of protons itself.