Solar flares are much more common than coronal mass ejections (CMEs). Nevertheless the standard model for a solar flare essentially requires the prior or simultaneous occurrence of a CME. How do we reconcile this discrepancy? A comparison of flare properties, for flares with and without CMEs, would seem like an obvious place to start. In this Nugget we tackle this question as regards the X-ray properties, basing our study on recent lists of powerful (hence easy-to-study) major flares without CMEs. These "confined" flares comprise about 10% of all of the X-class flares and have recognizable magnetic properties that point to the flare's magnetic environment as a key factor (reference [1]). The particular flares that we study happen to be GOES X-class events, which are the most energetic ones; it turns out that beyond this level essentially all flares have CMEs. We could also study weaker events without CMEs but it is more fun to concentrate on the 13 extreme CMEless events tabulated by Nat Gopalswamy and his collaborators (reference [0]). A much longer list of M-class CMEless flares could no doubt be compiled readily.

The RHESSI Browser shows one of the CMEless events to be impulsive and compact in nature. We can use the convenient CUA catalog of CMEs to view an EUV movie of this event; this confirms that there is no obvious ejection or dimming, as well as of course no CME. Even better, the TRACE movie of this event shows the usual flare morphology: two ribbons and a loop arcade.

Hard X-rays definitively mark the [impulsive phase] of a solar flare, the time of most intense energy release. Thanks to improvements in the data, we now can confidently say that this is the time of the fastest acceleration of the CME associated with the flare, if there is one. It is therefore natural to identify the impulsive phase with the drastic readjustments of the solar magnetic field that cause everything. An earlier Nugget has described the "soft-hard-soft" pattern of hard X-ray development that characterizes this phase of a flare. Figure 1 juxtaposes RHESSI data for a CMEless and a CME event from the same active region, taken from reference [2]. 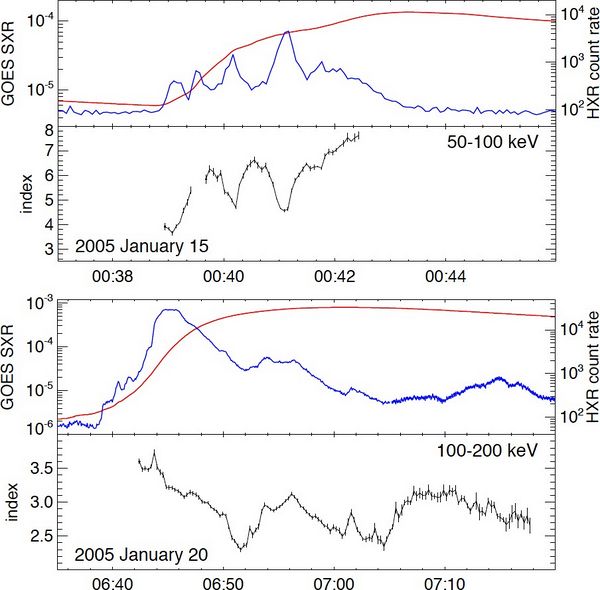 It turns out that there is a different morphology, often seen in the most energetic events: that of the soft-hard-harder spectral development. Somewhat to our surprise, we have found that we don't see this pattern at all in the CMEless events of our sample. The morphology is entirely the standard soft-hard-soft pattern. It has been known for some time that "extended" events with this hard X-ray spectral property correlate well with solar energetic particles (SEPs), a CME-related phenomenon discovered by Alan Kiplinger that relates to space weather.

Do these CMEless events also look different in soft X-rays? The answer to this is "yes" in two ways: first, they do not show the long-decay property that was one of the original motivations for the standard model. Second, they may not show obvious "precursors" - gradual increases often interpreted as pre-heating prior to a flare. We compare the durations of the CMEless flares with those of ordinary X-class events in Figure 2. 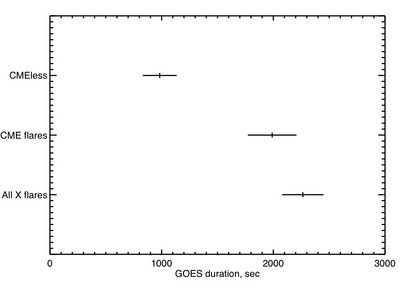 Figure 2: Durations of the 13 CMEless events in the Gopalswamy list (top) compared with all events of comparable GOES magnitude (middle) and all GOES X-class flares (lower).

The CMEless events (13 in number) only have about half the duration of comparable X-class flares with CMEs (56). We would have expected this relationship because of the long-known association of CMEs with long-decay flares. The bottom point in Figure 2 is for all X-class flares (96) in the interval of the CMEless list. CMElessness thus only strikes about 10% of such flares, and all of them were at the X1 level. Probably the simple conclusion is the right one: there is an energy threshold for a coronal disruption (as a CME) from a flaring solar active region.

The X-ray properties of the CMEless flares differ observably from those of comparable CME-associated events. They are shorter in duration, which we expected, but we were interested to find that the hard X-ray spectral evolution does not show the soft-hard-harder signature of coronal disturbances. This strongly suggests that such disturbances - there are several other signatures, especially at radio wavelengths - are the consequences of the coronal restructuring associated with the CME itself. The CMEless events remain confined at lower altitudes in the corona by magnetic fields not participating in the energy release (as shown in Reference [1]). Otherwise, the CMEless flares just appear to be ordinary flares.