We now have more than four sunspot cycles of homogeneous coverage of flare activity, and a quite uniform index in the form of the GOES/XRS soft X-ray measurements. The duty cycle of the observations approaches 100%, so that almost every flare event on the front side of the Sun, and some fraction from the back side, will result in a well-defined signature. As with all forms of flare activity, we can display them as a "butterfly diagram", which plots out the solar latitudes of the object (originally sunspots) as a function of time.

Figure 1: The historical "butterfly diagram" of Maunder, in part. This amazing morphology has several interesting features, none of which (most likely) had been predicted before Maunder's time (ref. [1])

We interpret the amazing morphology of the Butterfly Diagram in terms of the dynamical evolution of the magnetic field in the solar interior. In the well-accepted picture, a "dynamo" action resulting from differential flows ("shear") of the the strongly ionized gases in the solar interior act to amplify the magnetic field. Needless to say, since we cannot reach inside the Sun to do experiments, a lot of our knowledge of this is speculative. Basically strong magnetic field (concentrated magnetic flux) appears in the form of sunspots in the photosphere, where the field is strong enough to distort the very structure of the Sun. These sunspots appear in groups, ideally in pairs, over the space of a few days, and then degrade and disappear with ill-understood morphology over a space of several weeks. The magnetism of the spots observationally goes on for years and plays a key role in the solar cycle itself. Again, theories of these developments are more descriptive than they are predictive, but similar patterns do occur on other astronomical bodies.

Solar flares represent a whole different panorama embedded within this general development of solar magnetism. They are sudden powerful interruptions of the otherwise slow variations of the sunspots; with time scales down to seconds, a flare can locally double the brightness of the Sun (Ref. [2]; see also an earlier Nugget on the history of solar flares). The occurrence patterns of solar flares exhibit a strong element of stochasticity in time, but spatially they generally follow the sunspot regions (not always!). Their magnitudes also have an element of stochasticity; major flares are less frequent than minor ones, much like earthquakes.

This Nugget describes one of the peculiar properties of flare occurrence: often very powerful solar flares occur at the ends of solar cycles. We call these "last best" flares and list four of them, one per well-observed solar cycle, in the table here:

The final column of the table is the number of years relative to the prototype event of Cycle 22, SOL1996-07-09, referred to the mean duration of a sunspot cycle.

With this we illustrate our basic criterion: a "last best" flare is the unique X-class event at the end of the cycle. These are invariably at the low latitude expected from the butterfly pattern. The Cycle 22 event, based on imagining Poisson occurrence smoothly following the sunspot cycle, was highly unlikely; the Cycle 24 event may have been the most powerful event of its cycle.

Is the "Last Best" Pattern Robust?

Students of "solar cosmic rays", more commonly called "Solar Energetic Particles", or SEPs, have often pondered the peculiar tendency for the most powerful SEP events to occur with no regard for the solar cycle itself; that is, the biggest SEP events usually seem to avoid the time sof the biggest spots. This is anecdotal, and our neat table above is the same, but slightly more quantitative. We demonstrate that by showing a butterfly diagram of the most powerful flare occurrence in Figure 2. 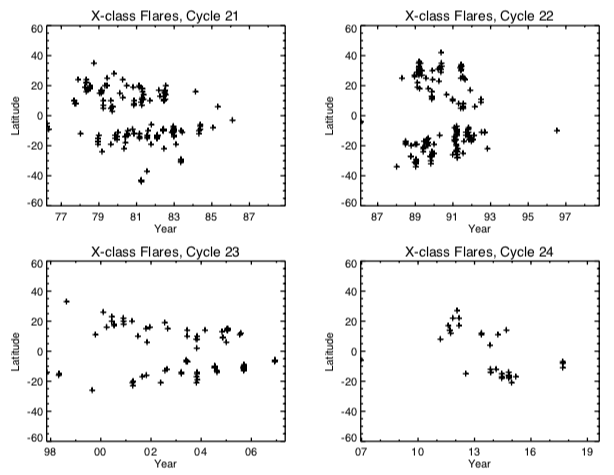 Figure 2: Butterfly diagrams of X-class flare occurrence for four solar cycles. The prototype of the "last best" morphology, Cycle 22 (upper right), is truly remarkable in terms of its isolation from the main body of flares.

Because of the association of solar flares with strong magnetic fields, we expect their butterfly diagram to have the same general appearance of the usual (sunspot) butterfly diagram. Also, because of the randomness (stochasticity) of their occurrence in time, we expect this pattern to be noisy. But still... it is eerie ("spukhaftig" in Einstein's language) that the most powerful flares do not occur at the peak of the cycle, nor at the beginning. Please see our previous Nuggets on SOL2017-09-10, the "last best flare" of Solar Cycle 24. One can find these by entering "SOL2017-09-10" in the search field at the Nuggets home page.

The "last best" flare pattern has reached the point at which it must be take semi-seriously, i.e. the theorists of solar dynamo action can now belatedly try to predict it. But is it really there? With only four cycles in hand, and with some arbitrariness in definitions, one cannot be sure. This Nugget is No. 358, and they appear at two-weekly intervals, so to get to an unambiguous pattern of ten repetitions, we must wait for Nugget No. 16,900, which we expect to see in about 2080 AD. This should not deter clever theorists from trying to explain what we see, though.

On a more serious note, the last best flare marks an epoch in the cyclic evolution of solar interior magnetism, expressed by physics we hardly understand. Many other features on the solar surface also help to guide our understanding, most famously the Babcock-Leighton dynamo, which Horace W. Babcock conjured up and Robert Leighton neatly modeled early in the computer era. Ref. [3] shows that efforts to pin down the sequence of events in the interior continues; unfortunately we see no correlation between our "last best" marker and the "terminator" marker described there.