The Cosmic-Ray Shadow and Coronal Magnetism

Direct measurements of the coronal magnetic field are very difficult. We know something about the photospheric field, thanks mainly to the Zeeman effect, but normally one must rely on mathematical or MHD-based extrapolations to infer the structure of the coronal field. These models are physically incomplete and generally do not describe the current systems flowing in the corona and around the sources of the solar wind. Even the Parker Solar Probe, which has now successfully had two perilous perihelion passages, will reach its position closest to the Sun only in 2024.

This Nugget describes a relatively new diagnostic tool that provides information about this difficult region: the cosmic-ray shadow of the Sun. See also an earlier Nugget.

The cosmic-ray shadows of the Sun and Moon

Galactic and extragalactic cosmic rays are highly energetic charged particles reaching Earth from outer space. Their energy spectrum follows a power law over many orders of magnitude and the majority of cosmic rays are protons. Due to scattering in interestellar space, over the large distances of travel from their sources, the arrival directions of high-energy cosmic rays that reach Earth are to a great extent isotropic. At TeV (1012 eV) particle energies, many different air-shower experiments, but also other instruments such as the IceCube Neutrino Observatory have measured the cosmic-ray shadows of the Moon and the Sun quite well.

In our recent work (Ref. [0]), we computed the cosmic-ray shadow of the Sun in the energy range of 5 to 316 TeV for five different particle masses and for different sets of Carrington rotations. For the coronal magnetic field, we assume a field derived from the Potential Field Source Surface (PFSS) model. Figure 1 shows an example of one of our modeled cosmic-ray images, revealing the distortions produced by the assumed coronal magnetic field. 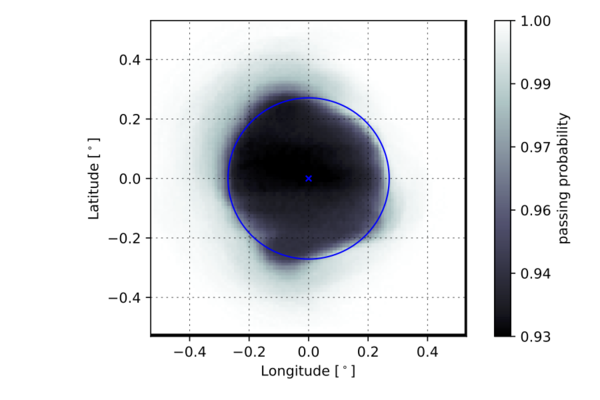 Figure 1: Simulated Sun shadow for the time range between November 2010 and February 2011 at an energy of 40 TeV. The color scale indicates the probability of a simulated particle to pass the Sun and its magnetic field without hitting the solar surface. The probability is calculated from averaging over different viewing angles. The time range reflects a time when the Sun shadow was studied by the IceCube Neutrino Observatory.

We also tested our simulations in an artificial magnetic field representing an ideal dipole. In order to reduce computational time, we only propagate cosmic rays that will in the end reach the Earth. This is achieved by a so-called back-tracking algorithm, which uses the principle that anti-particles behave the same as particles when propagated backwards in time.

Additionally, in the extreme case of an ideal dipole field or for times of very low solar activity, we predict a peak structure of the depth of the Sun shadow as a function of particle rigidity. This rigidity- (or energy-) dependent behavior of the Sun shadow (Figure 2) has not been observed yet 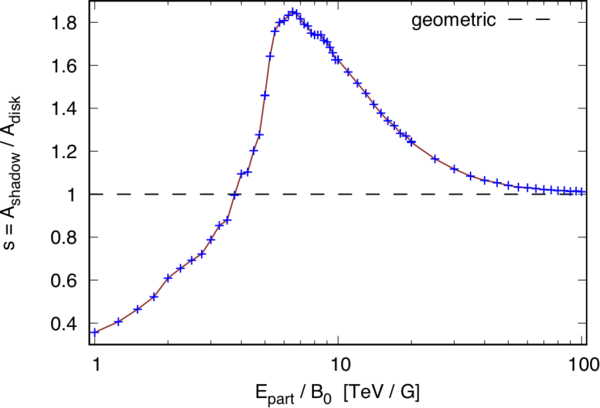 The cosmic-ray shadow of the Sun as measured by several experiments is a relatively new, but powerful diagnostic tool for evaluating different models of the coronal magnetic field close to the Sun. An energy-dependent measurement of the shadow even further enhances the possibilities for quantitative studies.