The Flare that Time Forgot

RHESSI, over its lifetime in space thus far, has detected many, many flares. Often a single event inspires a single paper, and then a flood of literature even if it's not very typical. The Masuda flare [1] would be a case in point - there have been many follow-up papers, and we've also had several Nuggets on this topic before: "An alternative view...", "Acceleration without heating", "Acceleration-region densities", etc., etc.

But, there was only really the one event, and many have commented how unusual it was. Was this type of event worth the fuss? The more examples one can find, the less atypical it will seem, but Yohkoh only detected that one clear example in its whole decade of observations. Thus we were amazed when a retrospective view of the RHESSI flares disclosed that the very first M-class flare observed by RHESSI looks very much like a Masuda flare! Somehow nobody picked up on this one, in spite of its newsworthiness. See Browser for a concise overview of the event.

How do we know nobody has studied this one?

The RHESSI book [2] has an extensive index, which makes use of the new IAU target designation scheme. This is fast becoming the standard, and it's really a good idea. Every flare, in this scheme, has a unique name identifier with the fixed pattern SOL2002-02-20T09:59, coding its time of occurrence, in this case as the time of GOES maximum. The target identifier also has the option of an extension for location. This standardization makes it easy to search any database, and (for example) a Google search just brought up an entire page of entries for SOL2002-07-23 - but none for our "Flare that Time Forgot" (yet). The nice index for the RHESSI book [2] has only one entry for it, a study of the albedo patch, but nothing concerning the interesting coronal developments. By contrast everybody's favorite SOL2002-07-23 has no fewer than 79 entries, and featured in Bob Lin's final chapter of the book specifically because of its Masuda-like properties. The "flare that time forgot" of course had not made the top-10 list of RHESSI flares.

Images show some of the attributes of this flare. Figure 1 shows soft, medium, and hard X-ray images via two imaging algorithms. They show the familiar cusp to be present at 25-50 keV, and above it a significant 50-keV source. In other words, it is probably another example of the much-sought-for Masuda phenomenon, and there it was on RHESSI's plate 11 years ago! 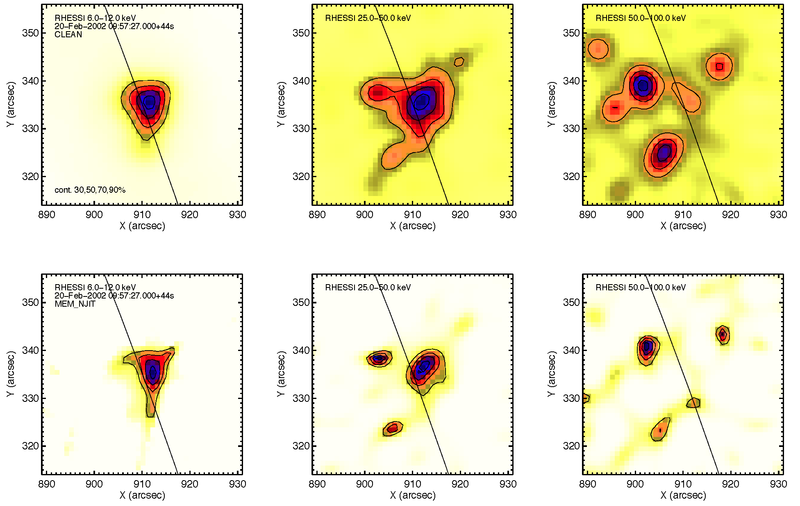 Fig. 1: RHESSI images from the flare using two inversion techniques: CLEAN at the top, and MEM at the bottom. From left to right, increasing energies (6-12, 25-50, and 50-100 keV). the simple structure seen in soft X-rays becomes more complicated with time, revealing a Masuda-type "above the loop top" source at high energies. Note that this appearance is in the early phase of the flare, as it was for Masuda's original event SOL1992-01-13 (Browser).

We discovered this event accidentally, while doing systematic pipeline processing. Doing an extensive standard survey of events is usually a good idea, but too seldom done. A throwaway paper describing a "gee whiz" event may or may not be worthwhile; in cases where the phenomenon discussed is not typical, it may still be important, but it may also confuse people. In our understanding of solar flares we have major systematic uncertainties in how things really work. Thus typical patterns are interesting, and routine analyses of many events together are certainly worthwhile. It is especially nice when they serendipitously suggest the identification of the Masuda phenomenon, for which we have had too few good examples.

Retrieved from "https://sprg.ssl.berkeley.edu/~tohban/wiki/index.php/The_Flare_that_Time_Forgot"
Category: Nugget
Facts about The Flare that Time ForgotRDF feed