One of the key processes associated with the standard flare model is chromospheric "evaporation," a process during which plasma heated to high temperatures by energy deposition at the flare footpoints is driven upwards into the corona. The physics of this action remains unclear, since the expansion of dense hot gas should result in adiabatic cooling, and yet we see flare loops filled with hot or even "superhot" plasma.

To determine where the hot plasma is located, spectroscopic methods are best used, as the EUV imagers such as AIA typically respond to multiple emission lines formed at different temperatures. Solar UV/EUV imaging spectroscopy is currently available through Hinode EIS (this Nugget) and IRIS. To create an image with these instruments takes time, since a slit must be scanned across the image field with with a separate exposure taken at each slit position. For flare-hunting this is particularly challenging, with even the fastest rasters taking approximately 5 minutes. This means the critical early stages of flares can be missed.

Hinode EIS also has a slot mode, though, as well as a simple slit. The width of its "wide" slot is 266 arc s , which can cover an entire active region. The spectral content of a given slot contains a number of emission lines, separated by wavelength but imaged at high resolution. Each image of each emission line is thus shifted and "overlapped", as with the pioneering observations of the "overlappograph" SO-82A instrument on board the Skylab observatory of the 1970s. This method allows clear identification of hot plasma, with full coverage of an active region, and high time cadence. Figure 0 illustrates the principle, based on whole-Sun imaging from Skylab. 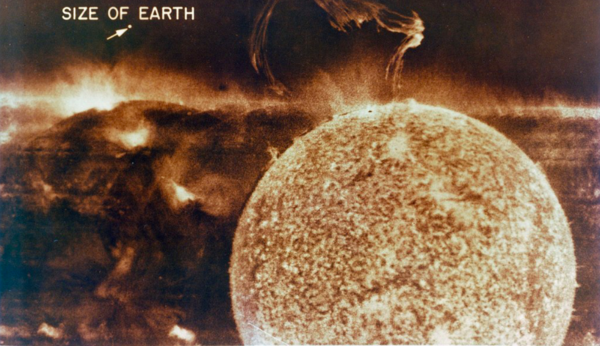 Figure 0: A classic example of slitless spectroscopy from the Skylab/SO-82A instrument. Multiple whole-Sun images near He II 256 Â appear shifted on the X-axis by precisely known amounts. Ref. [1] has a very nice description of our Fe XXIV target for the Skylab flare SOL1973-06-15.

The wide slot data are used in Hinode EIS as a flare trigger. It measures an increase in intensity, and this allows a change of observation mode to the flare site. Since slots have been used extensively for this purpose, there is a large database of slot data in the early flare phases. Figure 1 shows the emission lines in the slot's spectral band around the He II line at 256.32 Â. We are particularly interested in extracting the information from the neighboring Fe XXIV line (255.1136 &Acir;) in the early phases. This ionization state of iron is like lithium, i.e. it has only three remaining bound electrons out of 26. To do this we looked at two small flares, as reported in Ref. [2], and we'll show the example of the flare SOL2015-03-10T10 (C4.6) here. We analyse the EIS imaging spectroscopy data with the aid of SDO/AIA data. The AIA images have low spectral resolution, so there will is no informmation on Doppler shifts. EIS, however, will show any Fe XXIV emission either at a distinct location, or as Doppler-shifted away from the main He II feature by the spectral dispersion. 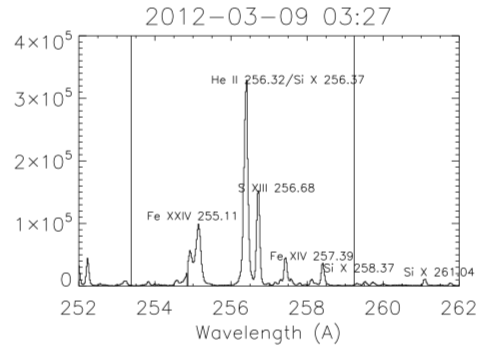 Figure 2 (left-hand image) is a He II slot image from SOL2015-03-10 at 20:55 UT, which is during the first peak of the C4.6 flare. The stack plots are derived by choosing a position in the y-axes of the slot image, and plotting this position with time. Each stack plot has the position in the x-direction as the y-axis, with time on the x-axis. The left column is the AIA stack plot in the 304 A filter at three positions that are highlighted on the slot image. The right column shows the EIS slot data at the same y-positions. The green circles highlight when the Fe XXIV spectral image appears in the EIS data, but is invisible in AIA confirming that it is a spectral feature. The blue circles highlight where emission is seen in both AIA and EIS, and hence the Fe XXIV is not found. The stack plots are shown in a reverse colour table where dark represents the highest intensity. The Fe XXIV emission is also coincident with the 12-25 keV hard X-ray emission, as measured by RHESSI. 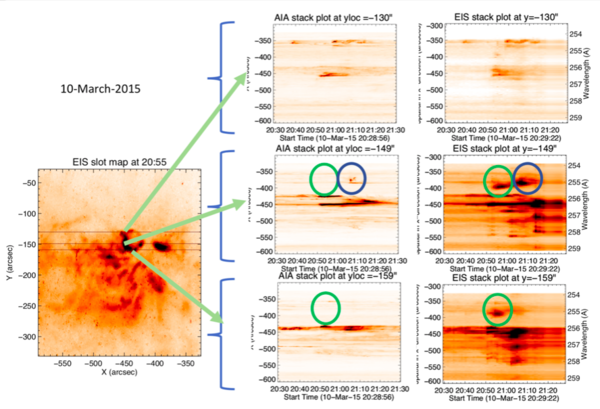 Figure 2: The left-hand image is a HeII slot image on 10 March 2015 at 20:55 UT, during the first peak of the C4.6 flare. The stack plots at the right are derived by choosing a position in the y-axis of the slot image, and plotting this position with time. Each stack plot is at a different y-position in the image. The stack plots are used for both AIA (imaging data) and EIS (spectral imaging). Note that the y-axis of the EIS stack plots shows both position and wavelength. A feature seen in EIS that is not seen in AIA is then a spectral feature. The positions circled in green show features seen in EIS at the correct wavelength for Fe XXIV but not seen in AIA - this confirms that these features are Fe XXIV.

The RHESSI observations for the 10 March 2015 flare indicate that there is an additional hotter plasma component which peaks in temperature prior to the peak of the non-thermal energy and Fe xxiv intensity, but that the hot Fe xxiv emission for both flares is located at the flare ribbons, consistent with the standard evaporation scenario. This suggests that the Fe XXIV emission is a reliable indicator of the sites where chromospheric evaporation is occurring, and it likely represents the upper temperature limit of plasma produced by this process. Future work quantifying the dynamics of the spatially resolved Fe XXIV emission could provide valuable insights into the distribution of energy deposition sites as the flare progresses.

The method described here allows us to establish the existence of hot plasma in small flares. We can follow its temporal evolution in a consistent way. There is a wealth of data available from the EIS wide slot studies, that is an excellent source for the hot plasma detection. The temporal cadence here was one minute as this is data for the flare trigger. However, other EIS studies exist with cadences of ten seconds, and these can be used for further studies.