When the Earth’s atmosphere becomes dynamic…

Flares are well known to produce ionospheric effects (see Nugget 251). For large flare events, the neutral density in the thermosphere shows enhancements, mainly caused by the solar EUV flux inserted into this layer of the atmosphere [3]. Energy input via the magnetosphere is also observed from flare-associated coronal mass ejections (CMEs) via geomagnetic storms. Especially, a CME-embedded flux rope with a southward magnetic field orientation, may cause an increase in the neutral density, causing an altitude decrease of Earth-orbiting satellites. Figure 1 illustrates the thermospheric temperature response to high solar EUV flux. Enhanced ionization (IN) and photochemical processes like photo-dissociation (PD) and dissociative recombination (DR) eventually lead to heating and subsequent expansion of the upper atmosphere and to the production of suprathermal atoms which may influence the energy balance in the thermosphere. Flares and CMEs, a well-known compound of solar activity, are therefore important for a better understanding of the “dynamics” of our Earth’s atmosphere. Vice versa, by studying the atmospheric response to solar activity, we derive a deeper insight into the physics of solar flares and CMEs – a win-win situation. 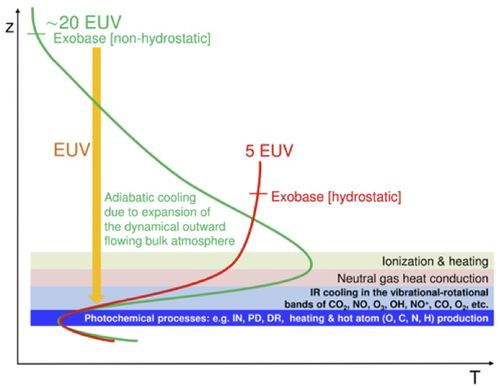 Figure 1: A schematic illustration of temperature vs. height in the terrestrial thermosphere, showing the enhancement due to increased solar EUV flux. Adapted from[3].

The Gravity Recovery And Climate Experiment (GRACE) satellites and their accelerometer measurements can be used to calculate the variations in the neutral density at altitudes of 450-500 km. We studied a set of 104 Earth-directed CMEs [4] that occurred between July 2003 and August 2010, and compared the CME impact characteristics with the geomagnetic response. Each CME event was analyzed in detail by using in-situ plasma and magnetic field data taken from the ACE satellite, which monitors the solar wind from the L1 Lagrangian point. Thus, characteristic CME parameters such as the impact speed (vmax) and the southward magnetic field strength (Bz) were extracted.

The results clearly show that the majority of CMEs is able to cause a distinct density enhancement in the thermosphere, with an increase up to a factor of 8 compared to the pre-event level. The highest correlations are derived for the CME Bz component with values greater than 10nT, while the correlation with the CME impact speed is somewhat smaller (see Figure 2). We also find that the density enhancement in the thermosphere is highly correlated to the Dst index (see Figure 3), a standard measure of geomagnetic activity that displays magnetic storms well. 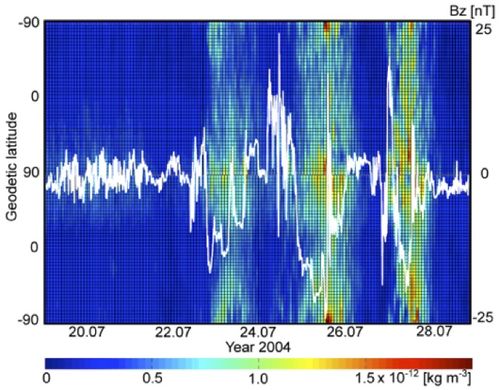 Figure 2: Latitude-time plot of thermospheric densities derived from GRACE accelerometry. The impact of three CMEs in July 2004 inducing severe geomagnetic storms can be identified in the density increase and the magnetic field measurements observed by ACE (white line). Adapted from [2].

The response to the impacting CME was also studied separately for the shock-sheath region and the magnetic flux rope. From this it is found that the Dst and SYM-H geomagnetic indices reveal a tighter relation to the Bz minimum value in the magnetic structure of the CME, whereas the polar cap geomagnetic indices show higher correlations with the Bz minimum in the shock-sheath region (see ref. [1]). Since the strength of the Bz component—either in the sheath or in the magnetic structure of the ICME—is highly correlated with the neutral density enhancement, we may use this relation to estimate satellite orbital decays based on magnetic field measurements at L1, i.e., before the CME hits the Earth magnetosphere. These results are expected to further stimulate progress in space weather understanding and applications regarding satellite operations. 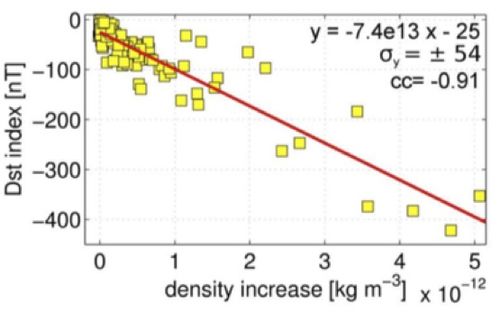 Figure 3: Scatterplots of the increase in the neutral thermospheric density and the geomagnetic Dst index. The correlation coefficients and the linear regression coefficients together with the standard deviation for a 90% confidence interval are given in the inset. Adapted from [2]

The Earth's atmosphere dramatically responds to solar input, ionizing, inflating, and flowing in response to hard radiation (EUV and soft X-rays) and to electrodynamic effects. These effects are important in a practical sense, since they affect low-altitude satellites, and also in an abstract sense because there are many important questions about the nature of the physics. This includes CME/ICME development, radiation from solar flares, and the complex dynamical chemistry of the Earth's upper atmosphere.

[3] "Solar flares as proxy for the young Sun: satellite observed thermosphere response to an X17.2 flare of Earth's upper atmosphere"