The Fermi gamma-ray observatory, thanks to its great sensitivity above 20 MeV, has surprisingly seen a large number of long-duration gamma-ray events [Ref. 1]. These events may continue for many hours, and pose a remarkable problem: we don't know what they are! Fermi imaging shows that they originate close to the flaring active region, and yet none of our beautiful EUV/X-ray imagery has yet identified the structure of the source. The coronal data show that these bursts, first detected by the Solar Maximum Mission, have an extremely close relationship with coronal mass ejections (CMEs) and with solar energetic particles (SEPs). This relationship is a very reasonable one, since the SEPs could interact with solar matter, spawning pions as secondaries and thence gamma-rays of the right energies. But... the SEPs, a few hours after the flare, have spread deeply into the heliosphere. How do they focus back on the Sun? Identifying the process here must be one of the most fundamental questions, with ramifications both for the physics of solar flares and for the mechanisms of space weather.

Because of the importance of these matters, we have had several previous RHESSI Nuggets relevant here: The basic physics of "collapsing traps" (93); the association of these events with other extreme high-energy phenomena, including direct neutron observations (227); their curious relationship with coronal dimmings seen in the EUV (179); and their relationship to Frost-Dennis (Ref. [2]) hard X-ray bursts (268). This may not be the whole list!

In this Nugget I try to bring some of this phenomenology together into what I call the "Lasso model". It is a toy model, without any theoretical underpinning nor any descriptive publication yet. The icon for this Nugget pretty much explains it all. The idea is that some volume of closed field (the lasso) intercepts the SEPs accelerated during the early stages of the even. These closed fields corral some fraction of the SEPs and prevent them from escaping into the heliosphere. Then the lasso knot tightens: this trapping volume contracts back down towards the photosphere (see Ref. [3]), advecting any particles trapped within it, and thereby accelerating them. At 3 solar radii a radial field, with 15% open fraction, will have a tiny (0.01%) loss cone, and so any field geometry allowing particle escape into the void would preclude gamma-ray interactions in the lower atmosphere.

This event offers an illustration of the basic components. The retraction of large-scale loops can be seen readily in the file movies for SOL2011-06-07 in the LASCO CME Catalog. The visibility of the downward plasma flows, of course, depends upon the entrainment of cool material. Not all events show this; in fact Ref. [1] also discusses a much more powerful long-duration gamma-ray event, SOL2012-03-07, in which one cannot readily detect this behavior. Figure 1, adapted from Ref. [1], shows the time range of LASCO retracting structure as envisioned by the model. Several observational constraints (notably the basic one that a coronagraph image does not actually detect the coronal magnetic field itself) make this coincidence suggestive, if not compelling. 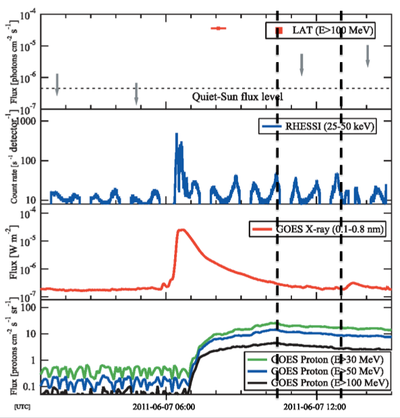 Figure 1: Timelines of phenomena observed for SOL2012-03-07 [1], with dashed vertical lines indicating the time range over which retracting coronal structures appear in the LASCO images. Note that the Fermi observations are not continuous, and that LASCO cannot observe the corona at the required height range.

The time scale for these high coronal downflows matches well enough with the time scale of the long-duration gamma-ray events. Confinement and betatron acceleration of the SEPs that might be trapped in the loops would be consistent with the observations. But where does the acceleration actually happen? We do not know directly, but we do have remote-sensing observations at many wavelengths. Among these we have meter-wave observations from ground-based radio observatories, which tell use very precisely when (but not where) the shock condition favorable for particle acceleration occurs. We also have the soft X-ray data, such as those from the GOES X-ray sensors, that tell us about the flare development. Figure 2 illustrates these two signatures for SOL2012-03-07. The shock condition precedes the GOES signal by about one minute, consistent with a very low altitude for the origination of the disturbance.

Figure 2: Left, the Learmonth meter-wave spectrogram of SOL2012-03-07. Right, the GOES 1-8 Å time profile and its time derivative. Note the one-minute delay between the very sudden meter-wave onset, and the 50% point of the soft X-rays.

The lasso model works well, schematically, if the particle acceleration occurs low in the corona. Then the SEPs would have a greater probability of appearing on closed fields, which could then retract and deliver their trapped particles to the denser solar atmosphere. This acceleration could occur as the result of a shock disturbance, via a large-scale wave propagating through closed fields, or it could occur deeper in the atmosphere by another mechanism. But if it's a shock, it must have propagated through domains of closed field.

This Nugget describes a toy model that relates long-duration solar gamma-ray emission to SEPs, even though they normally are observed in different places (SEPs out in the heliosphere; gamma-ray sources from near the Sun). The "lasso" of the model is a restraining closed magnetic field, extending far outside the "source surface" of the standard model. This mechanism could help flesh out the physical basis for the distinctive association between Fermi/LAT's "sustained" gamma-ray emission and SEP acceleration, a relationship noted by the pioneering solar gamma-ray astronomer Gerry Share. I hope that people will develop ideas such as this, but note that the observational match is spotty and that the clear correlation with the hard X-ray signature (Frost-Dennis; Ref. [2]) remains unexplained.

The supporting evidence for the lasso action (Figure 1) in SOL2011-06-07 certainly is not compelling, but only suggestive. Other events in which one can detect large-scale coronal flows in the EUV, such as those from the SWAP instrument, might provide further hints.

[3] "The Origin of Postflare Loops"