X-ray observations of solar flares - RHESSI's specialty - guide us to the highest temperatures present in flaring plasmas, and to the ill-understood but important processes of non-thermal particle acceleration. In a few cases, hard X-rays (those with photon energies above about 10 keV) have revealed the presence of coronal sources that appear to float above the tops of the flare loops themselves (see for example the review in [Ref. 1].) These of course are the well-known Masuda flares, for which there is now a huge literature. There are also many RHESSI Nuggets on this "above-the-looptop" (or Masuda-type phenomenon: "An Alternative View", "Double Coronal Hard X-ray Source", "Kappa Distribution", "Acceleration-region Densities", and "The Flare that Time Forgot").

The above-the-looptop source is important because it suggests that magnetic reconnection in the corona could play an important role in the explosive energy-release process for a solar flare. However, it remains unclear how the requisite production of non-thermal electrons during flares can be explained by magnetic reconnection. Some theories use plasma processes such as turbulence and shocks to explain electron acceleration (See the Nuggets "Spectral Evolution", "Collapsing Traps" and "The Formation of Kappa Distribution"). Thus, it is important to establish the basic properties of the above-the-looptop source in order to constrain theories of electron acceleration. A caveat here is that the lower energy range of the electron distribution is hard for RHESSI to observe, due to the usual presence of a very bright, thermal X-ray source located close to the above-the-looptop region. This helps to explain why there are actually more Nuggets about above-the-loop-top flares than the number of events!

While previous studies suggested that all electrons are accelerated to form a power-law (See the Nugget "Acceleration-region Densities"), we have proposed that the kappa distribution model (i.e., a Maxwellian-like core combined with a power-law tail) can equally fit the X-ray data from the above-the-looptop source (see our previous nugget "Kappa Distribution"). In this Nugget (See also Ref.[2]), we report an expanded study of the above-the-looptop sources, finding two cases with significantly enhanced non-thermal tail (hard X-ray) distributions, and two cases of less-enhanced non-thermal tail (Figure 2). With the kappa distribution model, we found that the flare SOL2012-07-19 showed the largest non-thermal fractions of electron number density (20%) and electron energy density (50%) whereas the SOL2013-05-13 event showed the smallest non-thermal fractions of electron number density (6%) and electron energy density (16%). These results can be discussed in the context of magnetic reconnection, as described below. 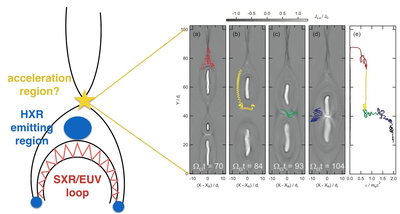 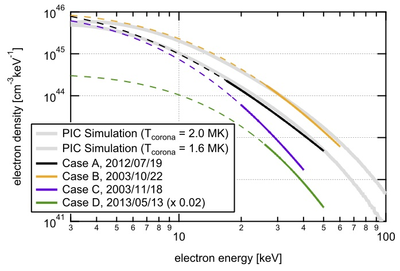 Let us compare the above-the-looptop electron energy spectra (as obtained from the kappa fits) with a typical energy spectrum of a 2.5D particle-in-cell (PIC) simulation of magnetic reconnection (Figure 1 right; [Ref. 3]). Of course, the simulation is far from realistic and our discussion here should be re-examined in the future with more sophisticated models. For example, particle transport from the reconnection region to the above-the-looptop region is not considered in the model. However, we think it is worthwhile to check how far a simplified (but up-to-date) reconnection model alone can explain observations of solar hard X-rays (See Ref.1 for the details of various reconnection scenarios of solar flares).

The model we use is a system of multi-island coalescence which evolves as a natural consequence of the tearing-mode instability of a current sheet. The model is different from the classical concept of direct acceleration by DC electric fields in the following points. First, the secondary reconnection at the island merging point generates an electric field directed opposite to the electric field of the primary reconnection. Thus, electrons can be confined in the out-of-plane direction. Second, electrons can be pitch-angle scattered by the sub-structures associated with the islands (See the example trajectory in Figure 1 right).

In Figure 2, it is evident that the PIC simulation result (gray curves) resembles the spectra obtained in the cases of significantly enhanced non-thermal tail (i.e., Cases A and B). Note that the PIC simulation spectrum can be shifted arbitrarily in the vertical axis direction whereas it is constrained by the initial thermal energy of the corona in the horizontal axis direction. Our main message here is that, although the precise form of energy spectra should be re-examined by more sophisticated models, a simplified reconnection model can already achieve non-thermal energies (up to ~80 keV) typically observed in the above-the-looptop source.

We conjecture that the other two cases (Cases C and D) did not show an enhanced non-thermal tail because of a relatively high source density. We estimated that the source density was significantly low (~109cm-3) and high (~1010cm-3) in Cases A and D, respectively (Cases B and C fall somewhere in between; See Ref.[2] for the details of the density estimation). Thus, we propose a scenario that electron energization is achieved primarily by collisionless magnetic reconnection but, if the source were sufficiently dense, the non-thermal tail can be suppressed or thermalized by Coulomb collisions.

A caveat here is that, if we only consider free-streaming electrons, all of the estimated source densities fall below the critical density above which the source becomes collisional. Thus, we further consider the effect of scattering due to waves, turbulence, or sub-structures within the above-the-looptop region. Such scattering may lead to the trapping of particles within the source, allowing them to have a greater chance of colliding with each other. We expect the actual critical density to be an order of magnitude smaller than that of the free-streaming case of 30 keV electrons.

Based on the above-the-looptop source observations interpreted with the kappa distribution model, we propose a scenario that electron energization is achieved primarily by collisionless magnetic reconnection but the non-thermal tail can be suppressed or thermalized by Coulomb collisions depending on the source density. This scenario requires a turbulent scattering that is strong enough to reduce the mean free path by an order of magnitude in case of, for example, 30 keV electrons.