But there was a bigger one

The Nuggets have been watching the current solar cycle as it begins (see Nuggets [A], [B], [C], [D], [E]); the remarkable thing about this series is that it began in December 2008, when we were already baffled by the lengthy sunspot minimum period. It has taken almost two years now for us to reach a level of activity where we might have a major flare, as described below, and in fact we are not quite there yet.

The new cycle (24) has been agonizingly slow to start, but we are now beginning to get scientific results on flares from the new cycle. We discuss one of them in this Nugget, and there will be many more in future Nuggets. The purposes here are (a) to give Max Millennium a pat on the back for predicting a big flare on November 6, and (b) to alert readers to a flare that they could not have predicted, but which is very interesting.

Solar physicists interested in flares are eagerly awaiting the powerful ones of this cycle, since there is amazingly good new observational capability such as the brand-new and powerful SDO satellite. Success here is measured in flares of GOES X category, none of which have yet occurred. We have though had eight M-class flares (a factor of ten weaker) since SDO "first light", and we will discuss one of the more interesting ones in the next section. Meanwhile, Figure 1 shows that indeed the areas of sunspots are steadily increasing, as expected even if a couple of years late. 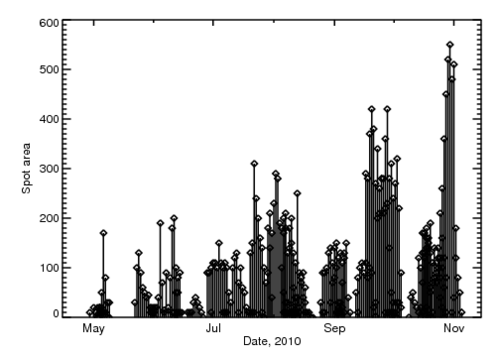 This spate of solar activity inspired the Max Millennium Chief Observer to declare a Major Flare Watch condition on November 5. Sure enough, the Sun cooperated and produced forthwith the most powerful flare yet this cycle, an M5.4 event, the very next day, November 6. In keeping with the smooth operation of this alert system, the Chief Observer ended the flare watch on November 7 and no important flares have happened since then.

But this Nugget announces to the world that the barn door in fact was closed too late. A more powerful flare probably occurred way back on November 3; it was listed as merely a C4.9 class, but at that time the active region (which later produced the November 6 event, and several others) was well behind the east limb of the Sun. This means that the flare's importance could not be easily recognized from front-side observations. We have STEREO, to be sure, but its instrumentation is not complete enough to characterize the magnitude of a flare.

The STEREO images can locate a flare, if not learn much about it quantitatively. The flare of November 3 occurred at about W12, as viewed from the Behind spacecraft (this is the one heading east, lagging behind the Earth). From our perspective on RHESSI, in low Earth orbit, made it occulted by about 12 degrees; a tangent to the solar limb along our line of sight would pass 10-15,000 km above the site of the flare. This means that RHESSI can study purely coronal effects, without confusion from the footpoint sources. Moreover it is high enough to have occulted a large part of the soft X-ray source, making the GOES classification a lower limit. It is our guess from the RHESSI data that this flare was at least as powerful as the November 6 event. We show a couple of images in Figure 2. 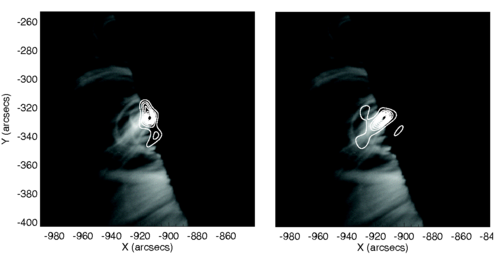 RHESSI views of the occulted flare SOL2010-11-03, estimated to have been at about longitude W102. Left: 6-12 keV at flare peak; right, 25-50 keV. The soft X-ray source hugs the limb, as would be expected for a partially eclipsed source; the hard X-ray source extends into the corona.

There is clearly a coronal hard X-ray source waiting to be analyzed here (see Reference [1]). But, thanks to STEREO and now SDO especially, there are many other kinds of data. The "latest events archive" links for this flare include wonderful [AIA] movies at many wavelengths in the UV and EUV. We cannot show a movie directly on this Wiki, but clicking here will show an amazing AIA movie made in the 193A passband; if you look here and here you will see how the flare developed via direct STEREO Behind views (these movies courtesy of Nariaki Nitta, a frequent Nugget contributor). The EUV passbands shown in the moviers are tuned mainly to show material at coronal temperatures. In the AIA one can see global coronal responses to the flare explosion, in the form of waving and oscillating coronal background structures as the flare disturbances passes through them; in the STEREO movies one can see where the wave(s) actually come from. These disturbances carry wonderful information about the energy of the explosion, and its geometry.

With this event we have caught the coronal disruption induced by a major flare in full detail, with excellent data from SDO, STEREO, and RHESSI. Now, who will analyze these fine data?

We note also that the Max Millennium Chief Observer could not have anticipated this event, because of its occurrence behind the limb. Without full knowledge of the development of the active region one cannot do a good job of prediction. We need better stereo observing facilities! In spite of Figure 1, we found that when the active region rotated onto the disk and we could see the sunspots, they were rather puny ones. So there is certainly no one-to-one relationship between spots and flares.

Retrieved from "https://sprg.ssl.berkeley.edu/~tohban/wiki/index.php/But_there_was_a_bigger_one"
Category: Nugget
Facts about But there was a bigger oneRDF feed