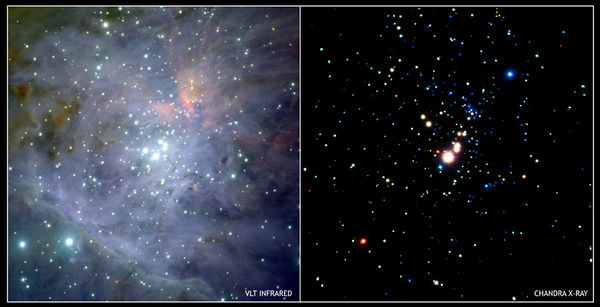 The idea that the Sun may be representative of a larger class of “solar type stars” dates back at least to George Hale's suggestion in 1915 of the likely existence of untold number of solar analogs. Since then, the identification of T Tauri Stars (TTS, a class named for the first source of this type) as “young Suns” has become well established, dating back to Alfred Joy's 1945 observations of the marked similarities between these young stars’ spectra and that of the solar chromosphere [Ref 1].

The solar-stellar connection for young, solar-type stars is of interest to astrophysicists and solar physicists alike: on the one hand we seek to know what the Sun was like in the epoch of planet formation, and at the same time the Sun is a uniquely situated laboratory for understanding the detailed physics of its more distant TTS analogs. While solar X-class flares can be bad news for the denizens of 1 AU, proto-Earths orbiting TTS are subjected to extreme activity, with frequent and energetic flares observed to be up to X30,000 in solar classification terms!

Applying solar flare models [Ref 2] to stellar flares observed during the Chandra Orion Ultradeep Project (a 13-day survey of ~Myr old stars in the Orion Nebula Cluster, Figure 1), the sizes of the magnetic loops confining post-flare X-ray emitting plasma were inferred to be as large as tens of stellar radii in extent [Ref 3]. Even if we were to discount the longest inferred loops as derived from unresolved arcades, loops of a few stellar radii strongly suggest prominence-like structure in stellar coronae. Indeed, other observational evidence supports the presence of extended prominences and coronal structures [Refs 4, 5].

For the longest inferred loops, it was suggested they may be facilitating star-disk interaction: this is appealing as it supports models of accretion, provides a mechanism for angular momentum transport between star and disk, and resolves the question of the loops’ stability over multiple rotation periods. We found, however, that in many objects exhibiting these huge loops there was apparently no disk material close enough for the loops to anchor to [Ref 6]. To address the question of loop stability, we modeled these loops as prominences, finding that extremely large magnetic structures can reach mechanical equilibrium if they are embedded in the scaled-up, solar-like wind [Ref 7] evident in observations.

All of this considered, to address the long-standing problem of understanding early stellar angular momentum evolution, we posed this question: could the loss of equilibrium of these large magnetic structures lead to coronal mass ejections (CMEs) or prominence eruptions substantial enough to slow stellar rotation? Since stellar CMEs remain observationally elusive, we approach from the observable--the flare--and infer properties of stellar CMEs.

It has been understood for some time that the energy of a flare is related to properties of an associated CME (indeed, Brian Dennis wrote a Science Nugget about this very idea, relating flare energy to the kinetic energy of the CME). Should both a flare and an associated CME be driven by a common reconnection event, one could invoke an energetic partitioning argument to explain why these properties may be related. Cross-referencing 10 years of LASCO and GOES data, we found that for associated (i.e., cospatial and cotemporal) flares and CMEs, the flare energy and CME mass are indeed positively correlated [Ref 8]. This is to say, as flare energy increases, so too does the mass of the associated CME (Figure 2). Additionally, we found that the association rate increases with flare energy. 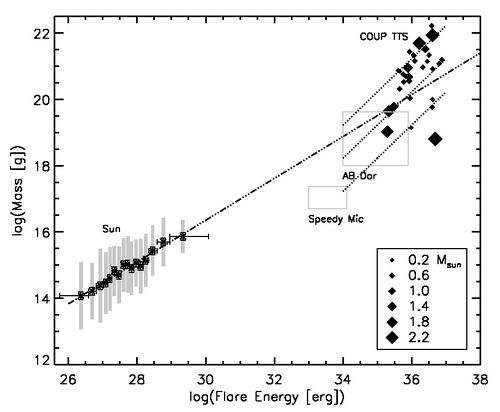 In Figure 2, we show the full range in energy from solar flares up to TTS flares, and the form of our relationship extrapolated directly up to stellar flare energies. In an effort to constrain the TTS end of the extrapolation, we have calculated the mass confined by the post-flare magnetic loops; to do this, we use the X-ray emission measure as a proxy for density, and the loop geometries reported in the literature [Ref 3]. The dotted lines show theoretically predicted loop masses for a range of densities [Ref 9]. Interestingly, Figure 2 shows the relationship between flare and CME/prominence mass spans many orders of magnitude in both parameters, and two very disparate ages represented by our 4.6 Gyr old Sun and ~1 Myr old TTS. The data are sparse in the middle of this figure due to detection limits and the precipitous decline in stellar activity with age. We do, however, see some extreme cases: AB Dor and Speedy Mic are ~20-50Myr K stars with prominence mass estimates [Refs 10, 11] in the literature as well as X-ray flare detections [Refs 12, 13] (unfortunately, these are not contemporaneous observations, so the boxes are showing the ranges observed in both quantities). With a few data points, we make no firm assertions, but do find the suggestion of a progression along this relationship--declining flare energy/CME mass with increasing age--very interesting.

Reassured that extrapolating the solar flare energy mass/CME mass relationship up to stellar masses would be a reasonable first-order approach, we did just that, and used a TTS X-ray flare frequency distribution to estimate mass loss rates via CMEs [Ref 14]. Trying various methods to mitigate detection limit effects and testing the sensitivity of the calculation to assumed parameters, we arrived at an estimated range of stellar CME mass loss rates from 10-12 to 10-9 MSun yr-1. We performed the exact same analysis on solar data and recovered the observed solar CME mass loss rate within ~1%. Our stellar CME mass loss rates make sense in the context of stellar observations; these estimates are lower than stellar wind mass loss rates ([Refs 15, 16], as expected, since that is true for the Sun), and also less than accretion rate estimates [Ref 17].

Finally, we use these mass loss rate estimates and model CME mass loss torques like a stellar wind, using an efficiency parameter to explore how the episodic nature of CMEs would affect the torque. In Figure 3 we show how two of the main competing torques in the system, spin-up due to stellar contraction and spin-down due to CME mass loss, would act on stellar rotation as the star evolves. 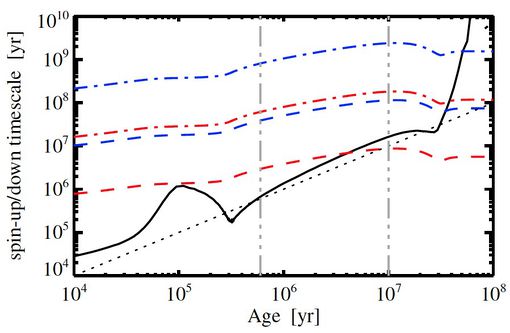 Figure 3: Spin-up/down timescales for different torques acting on stellar rotation as a function of age (vertical, gray lines mark the approximate TTS phase of stellar evolution). Blue lines denote an assumed mass loss rate of 10-12 MSun yr-1; red lines are 10-10 MSun yr-1. Dashed lines assume 100% efficiency removing angular momentum, dotted lines are models with an efficiency factor of 10-3. The solid black line shows spin-up due to stellar contraction, and the dashed black line is equality (the star takes its entire lifetime to spin down). At any point in the star’s evolution (progression along the X-axis), the dominant timescale is the lowest in Y value; where the contraction spin up line rises above the red CME mass loss spindown line, CMEs become the dominant torque against stellar rotation. Figure reproduced from Aarnio, Matt & Stassun, 2012 [Ref 14].)

We find that the relationship between solar flare energy and associated CME mass follows a log-linear relationship over several orders of magnitude in both quantities. Further, we suggest this relationship holds to even higher flare energies and CME masses for young, solar-type stars. We use the relationship to estimate mass loss rates from 10-12 to 10-9 MSun yr-1. We have also found a set of conditions (frequent eruptions, >10-10 MSun yr-1) in which CMEs can indeed slow stellar rotation toward the end of the TTS phase.

Alicia Aarnio is an Assistant Research Scientist in the Astronomy Department at the University of Michigan. Her early research experience included two summers as a NSF Research Experience for Undergraduates student, CLEANing compact flare images with Ed Schmahl and the RHESSI team at the NASA Goddard Space Flight Center.

[2] Determination of the length of coronal loops from the decay of X-ray flares I. Solar flares observed with YOHKOH SXT

[9] A Hertzsprung-Russell-like Diagram for Solar/Stellar Flares and Corona: Emission Measure versus Temperature Diagram