After more than 150 years, the space-weather event of 1859 associated with Carrington's name, continues to intrigue and inform us. It was relatively well observed by the tools available at that early time, which of course did not include any of the electronics that we take for granted today. The phenomena observed included the Carrington white-light flare itself, plus prompt and delayed geomagnetic effects that (mostly in retrospect) laid the foundation stones for space weather studies.

This "Carrington flare" is doubly distinguished both as the first reported solar flare and also because of its association with the largest geomagnetic disturbance yet recorded. It remains the exemplar and guide for us as regards extreme space-weather events.

In a recent paper [Ref. 1], we have reassessed the size of the 1859 flare and its consequences. Our best guesses are as follows: a GOES flare magnitude (soft X-ray classification) and total (flare radiation plus CME kinetic) energy of ~X45 and ~2 x 1033 erg, respectively (Figure 1); a >30 MeV proton fluence (F30) of ~1010 pr cm-2; and a minimum Dst index of ~ -900 nT. These estimates and those measured for the closest modern competitors in each category are shown in tabular form here:

The Dst index is a measure of global variability during a magnetic storm. The estimated geomagnetic Dst index of -900 nT for the Carrington storm, reduced from a reported -1760 nT value based on Colaba (near Mumbai, India) observations, reflects direct [Ref. 2] and indirect (Figure 2) evidence that the Colaba reading included an auroral component.

Fig. 1: Greenwich Observatory magnetometer traces (horizontal force on top and declination on the bottom; the two traces are offset by 12 hours) during the time of the solar flare on 1 September 1859. The red arrows indicate the magnetic crochet or solar flare effect (SFE). Comparing the size of this SFE with those associated with modern large flares for which the SXR classification is known permits an estimate of the size of the 1859 flare. The writing at the bottom in the red box says "The above movement was nearly coincidental in time with Carrington's observation of a bright eruption on the Sun. Disc[overed] over a sunspot. (H.W.N., 2 Dec 1938)." The annotation "H.W.N." refers to Harold W. Newton, Maunder's successor as the sunspot expert at Greenwich.

In a related paper [Ref. 3] we question the recent attribution of the cosmogenic nuclide event of 775 AD [Ref. 4] to the Sun [Ref. 5]. Such a solar event would imply an F30 value of ~8 x 1010 pr cm-2 (approximately 10 times the value recorded during the three-month interval of sustained strong SEP activity from August-October 1989), a 1 GV proton fluence 45 times larger than that of the February 1956 ground level event, and flare with a GOES classification of X230 (1034 erg) flare. 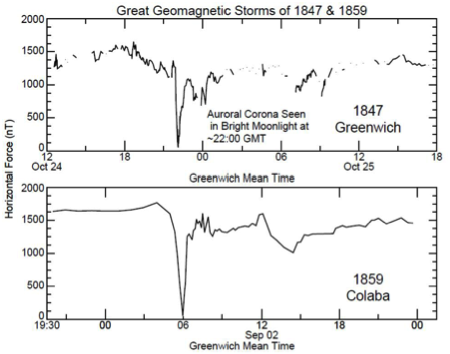 Fig. 2: Comparison of great magnetic storms observed at Greenwich in October 1847 (top panel) and at Colaba in September 1859 (bottom). The H-component magnetic intensity and time scales are the same in both plots. The peak of the 1847 storm coincided with an aurora observed in bright moonlight in southern England. The similarity of the two time profiles and the work described in Ref. [2] suggest that the 1859 event was similarly affected by auroral currents.

The solar flare and terrestrial effects of the Carrington space-weather event of 1859 are still of great current interest, and the work described here is helping to place it in the context of recent observations. There is a caveat regarding the coincidence of first flare and greatest storm in the 1859 event. Hugh Hudson (personal communication, 2013) cautions that the first flare reported was bound to have been a whopper. That said, there is no guarantee that a big flare will produce a big magnetic storm, since its heliographic position and the orientation of the magnetic field in the accompanying CME are also crucially important for such effects. The 4 August 1972 flare had a CME with a shorter transit time to Earth than that of the 1859 event (14.6 hr vs. 17.5 hr) but the associated 1972 storm (Dst = -125 nT) does not rank near the top 25 of such events.