High Energies in the Inner Heliosphere

How bright is the hard X-ray Sun at solar minimum? We do not know, since even RHESSI has only established upper limits at present (Ref. [1]). Why should it emit any hard X-rays at all? This is easy to answer, at least partially, and there are observations by Fermi at much higher photon energies (Ref. [2]) - indeed, Fermi observes not only the disk of the Sun, but also a diffuse source centered on it. Both of these components originate in galactic cosmic rays with energies high enough to penetrate into the inner heliosphere, and even to strike and interact in the photosphere itself. This would be the solar equivalent, not much explored yet, of the celebrated Størmer problem of cosmic-ray transport around the Earth.

There are other processes in which the heliosphere plays a role in the hard X-ray and gamma-ray emission from quiet Sun. This Nugget lists a few phenomena related to high-energy particles in the inner heliosphere (please also see the recent Nugget on flare-related particles, neutrons, and gamma-rays. Then we discuss one of them, the remarkable cosmic-ray shadow of the Sun and inner heliosphere. The technique here originally became famous via its use to probe the Pyramids for hidden burial chambers.

Items of interest include some of the following, some of which Nuggets have touched on, some of which we hope to explore in future Nuggets, and always the possibilty of new discovery.

The cosmic-ray shadow of the Sun

We describe this fascinating subject briefly, since it may be unfamiliar to many. The implication for RHESSI is only that this provides direct evidence that high-energy (TeV) cosmic rays do make it to the solar surface, and can therefore be a source of many kinds of secondary radiation. A TeV-range cosmic ray can be absorbed by the Sun as it approaches the Earth, but it can also be deflected by the solar magnetic field (Figure 1). This deflection obviously will depend upon the coronal magnetic field in a direct way, for a single particle. In practice one needs to integrate over many particles to define the shadow experimentally, and so one must resort to forward modeling via some parametrized form of the field structure (such as the so-called PFSS model).

Figure 1: Cartoon illustrating the flow pattern of high-energy (TeV) galactic cosmic rays impinging on and deflecting around the Sun, on their way to be detected by air-shower arrays on Earth.

The detection process for the solar shadow involves determining the arrival directions of cosmic rays at such high energies that they propagate almost on straight lines, but not so straight that their deflection in the coronal magnetic field becomes un-detectable. The most efficient way to detect these high-energy primaries is via extended air showers, in which a cascade of nuclear and atomic processes develops following a primary interaction. The analysis of these multiple secondaries results in quite a precise determination of the arrival direction; viewed as a telescope, the best air-shower arrays nowadays do this much better than one degree. Figure~2 shows an image from the ARGO-YBJ collaboration in Tibet. 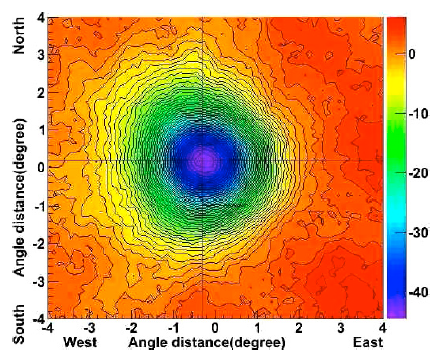 Figure 2: Solar image, at very high significance, from the ARGO-YBJ collaboration. Here the color scale is in typical high-energy astrophysics units: sigmas. One sigma corresponds to the RMS uncertainty of the measurement. This image has enough statistical weight to allow some exploration of the parameter space for the primary deflections around the Sun.

The image shows an object somewhat larger than the solar disk, and not very disk-like. This reflects the relatively low angular resolution of the current air-shower arrays, but that is improving. The lunar shadow, not shown here, provides a fiducial reference for direct shadowing without the magnetic effects, and so the telescope-like properties of these systems actually have a natural means of calibration.

There are many ways in which high-energy particles can tell us things about the Sun, its corona, and the heliosphere. In this Nugget we have just shown one of them, the TeV shadow observed by several ground-based arrays sensitive to this particle energy range. Reference [4] describes one of the arrays in Tibet, announcing that even two decades ago this technique already provided sufficient signal-to-noise to be able to detect the solar sector structure (the away and towards regions of interplanetary field. They could do this exactly in the region where the standard PFSS models make their gravest errors by construction, and so in principle this should provide an excellent global test of the evolution of the large-scale solar magnetic field as it connects out into the heliosphere. Furthermore they can do it with sufficient time resolution to follow the flips and flops of the interplanetary sector structure.

From RHESSI's point of view, we are more interested in the little yellow stars in Figure 1, which show primary cosmic-ray interactions at (or just below) the surface of the Sun. Can secondary radiations from these particles provide (for example) a bright ring of emission around the solar limb that we could detect?