Every individual X-ray photon detected by RHESSI gets its own unique telemetry allocation. This makes great flexibility possible, in principle, since the "observer" can pick and choose how to integrate these photon counts into images and spectra. Earlier Nuggets([1] and [2]) explained this, but we describe here one of the first applications of this capability for really deep integrations of faint sources: the detection of a very long-lived coronal X-ray sources associated with a CME. Because RHESSI forms images, long integrations of the data permit greater sensitivity, essential for studying the middle corona (say, above 0.1 RSun in height) with its low plasma density and hence low emissivity.

A coronal mass ejection (CME) has the clear appearance of an catastrophic expansion of the coronal magnetic field; indeed the structure becomes so large that it passes the critical point and enters the solar wind itself. This requires a great deal of energy, but essentially every X-class solar flare is accompanied by a CME. In the aftermath of a CME, the solar wind finds itself with too much magnetic flux, and to return to its steady state it needs to create shorter magnetic connections from the newly "opened" field. This requires magnetic reconnection and the likely formation of a current sheet where the reconnection takes place. This would be a linear structure extending essentially radially outward from the flare. All of this is well worked out conceptually, and supported by much observational work; indeed the current sheets themselves may be detectable via UV line emissions in high-temperature lines.

The instrument that has produced the best evidence for CME-related current sheets is UVCS on the SOHO spacecraft - a venerable space observatory launched in 1995 into the L1 [wikipedia Lagrangian point] of the Sun-Earth system. Its observations of an event of 2002 November 26 (see reference [1]) inspired the RHESSI analysis described here and in references [2] and [3]. During this event the UV spectra showed emission from a line formed above 8 MK (Fe XVIII at 974A) located at 0.7 RSun above the photosphere for more than two days, and much other evidence suggested that this emission could in fact be associated with the magnetic reconnection required for the restoration of a "normal" solar wind. Such high temperatures put this event squarely into RHESSI's comfort zone for observation of thermal X-radiation (ie, that from a hot [Maxwellian] plasma). Moreover the physics of magnetic reconnection might involve the acceleration of a non-thermal electron population that RHESSI could detect at higher energies as well. 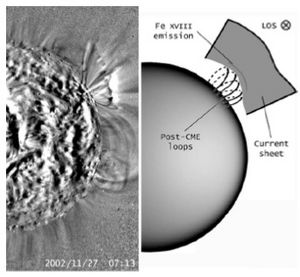 Figure 1 The event of 2002 November 26, as seen in an EUV difference image (left), and as a cartoon (right). The arcade of loops is clearly visible, tilted with respect to the line of sight and with the characteristic growth pattern (white above black in the timewise difference) and nearly radial rays above the arcade.

Figure 1 shows the layout of the event as a difference image of the W hemisphere of the Sun, as seen in the 304 A ([He II]) passband of [EIT]. This difference clearly reveals the huge arcade of loops that follows the flare and CME, with a characteristic white/black pattern signifying the occurrence of loops at higher and higher altitudes. Above these loops we see the characteristic near-radial rays that presumably extend into the solar wind following the CME itself.

The cartoon at the right of Fig. 1 shows a quadrangular shaded area that represents the current sheet, conceptually a planar structure separating the opposite magnetic polarities. This is where the magnetic reconnection needs to happen, and the association of the hot FeXVIII line with this process (as discussed in reference [1]) follows the logic that the heating results from this reconnection.

The UVCS data showed FeXVIII generally in the area of the current sheet hypothesized in the sketch of Figure 1. Because RHESSI can make images at a few keV, it works well for such sources, and we show some of the observations in Figure 2. RHESSI clearly detects a rising soft X-ray source (for 12 hours!), as shown in the contours overlaid on the EUV image in the left panel. It is in the same projected radial direction as the UVCS source. The spectral fits to the RHESSI data agree well with the temperatures needed to excite the FeXVIII emission seen by UVCS largely later in the event.

The right panel of Figure 2 shows a RHESSI first: an image created from a five-hour integration, with the effects of source motion removed (effectively, "tracking the source with the camera"). This has only become possible recently in the RHESSI software because of its new capability for analysis of the visibilities - not a new technology in general, since radio astronomers use visibilities all the time, but a new capability for RHESSI thanks to adaptation of the method. The latitude of the RHESSI source closely matches that of the UVCS source that is already present at higher altitude at the time that RHESSI ceases to observe the X-ray source.

In Reference [2] we propose, somewhat radically, that the energy for the UVCS emission might flow from the source RHESSI images, rather than the other way around as envisioned by the classical reconnection model. This is because the RHESSI source, based on the most plausible assumptions regarding its geometry, contains some 10 times the energy of the current sheet.

The possibility of a five-hour integration of RHESSI data has brought some new light to bear upon the goings-on in the middle corona after a flare/CME eruption. Note that the parent flare was classified as C1, i.e. a rather weak GOES event, but that the coronal developments over the next two days were significant. There may well be many examples of such phenomena in the RHESSI observations, which (thanks to the visibilities) can be integrated for long periods of time, even allowing us to piece together data outside the times of confusing impulsive events. The analysis reported in [2] is the first of its kind, and we hope that other examples can be found.

[1] Current Sheet Evolution in the Aftermath of a CME Event