For the most part RHESSI observes hard X-rays (HXRs) from bright footpoint sources via the Neupert Effect. These footpoint sources lie at the intersections of coronal magnetic fields with the lower solar atmosphere. As many of these Nuggets have discussed, RHESSI also sees a variety of sources in the solar corona.

A recent paper (Ref. [1]) attempts to set the record straight by reinterpreting observations of a group of flares that have been reported to have hard X-rays (HXRs) coming predominantly from the corona rather than from the more usual chromospheric footpoints (Ref. [2,3,4,5,6]). All of the 26 previously analyzed event time intervals, over 13 flares, were re-examined for consistency with a model in which electrons are accelerated near the top of a magnetic loop that has a sufficiently high density to stop most of the electrons by Coulomb collisions before they can reach the footpoints. Of particular importance in the previous analysis was the finding that the length of the coronal HXR source increased with energy in the 20 - 30 keV range. Such behavior is inconsistent with a unique thermal source in equilibrium, the size of which must generally decrease with increasing energy as the emission becomes more and more dominated by the hottest regions. The observed behavior would however be consistent with the transport of accelerated electrons through a collisional target, since higher energy electrons travel further.

However, after allowing for the possibility that footpoint emission at the higher energies affects the inferred length of the coronal HXR source, and using analysis techniques that suppress the possible influence of such footpoint emission, we conclude that there is no longer evidence that the length of the HXR coronal sources increase with increasing energy. In fact, for the 6 flares and 12 time intervals that satisfied our selection criteria, the loop lengths decreased on average by 1.0 ± 0.2 arcsec between 20 and 30 keV, with a standard deviation of 3.5 arcsec. We also find strong evidence that the peak of the coronal HXR source increases in altitude with increasing energy. For the thermal component of the emission, this is consistent with the standard ("CHSKP") flare model in which magnetic reconnection in a coronal current sheet results in new hot loops being formed at progressively higher altitudes. The explanation for the nonthermal emission remains unclear.

The effect of weak footpoint emission at higher energies on the apparent source length is shown during the M3.7 flare in NOAA AR09893 at N16W60 that peaked at 00:14 UT on 15 April 2002. The time history is shown in Figure 1 and the spectrum for the 5 min. interval at the start of the impulsive emission is shown in Figure 2. The count fluxes are fitted to a thermal component consisting of a differential emission measure that is a power-law in temperature (multi_therm_pow) plus a nonthermal component (thick2_vnorm) with a power-law electron spectrum. With these assumed components, the nonthermal emission dominates at energies up to ~22 keV. This is to be compared to a crossover energy of ~15 keV if an isothermal function is assumed as was done previously (Ref. [4]). Such an isothermal function is inconsistent with the change in altitude of the coronal source with energy as indicated in Figure 3, where a 12 - 25 keV image is shown with the 25 - 50 keV contours overlaid. The loop structure is clearly evident in both energy ranges but with a ~5 arcsec offset corresponding to a higher altitude in the higher energy band. Two footpoint sources appear in the 25 - 50 keV image at the expected locations with respect to the loop structures. 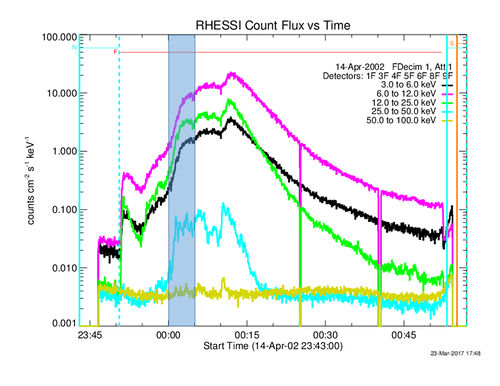 Figure 1: RHESSI light curves for the flare SOL2002-04-15. The color-coded curves are for the five indicated energy ranges. Counts from the front segments of all detectors except for detectors #2 and #7 were summed and divided by the summed live times and the total effective sensitive area of 35.59 cm2 per detector to give the plotted values with a 4 s cadence to match the spacecraft spin period. The thin attenuators were in place above all detectors limiting the useful energy range to > 6 keV. The blue shaded areas show the first of the three time intervals between 00:00 and 00:05 UT used here and by Guo et al. (2012a,b, 2013) to determine the source dimensions. 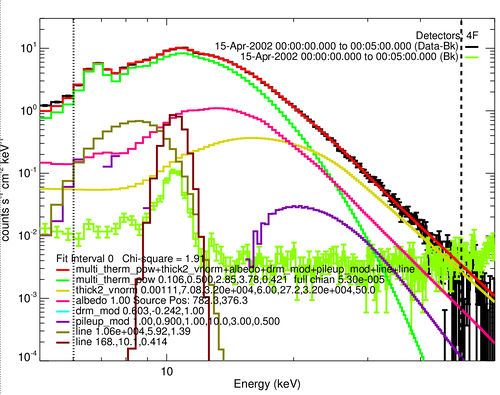 Figure 2: RHESSI count flux spectrum for the five-minute time interval shown in Figure 1. The black histogram is the background-subtracted count flux in the front segment of Detector #4. The red histogram is the function that was fitted to the data between 6 and 50 keV. It is the sum of the following components: a multi-thermal bremsstrahlung function (green), a power-law nonthermal thick-target function (yellow), an albedo function for isotropic emission (pink), the estimated pulse pile-up contribution (purple), and two Gaussian instrumental lines (olive and brown). The background spectrum (green) determined from the nighttime period immediately prior to the are is shown with +/-1 sigma error bars. The values of all parameters used for the fit are given for each functional component. 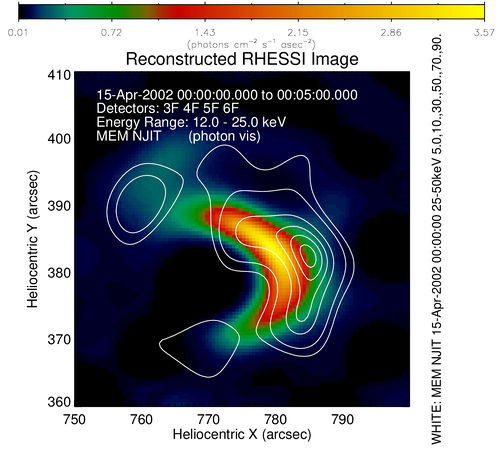 Figure 3: RHESSI 12 - 25 keV colored image overlaid with 25 - 50 keV contours for the 5-min. interval from 00:00 to 00:05 UT made using the MEM NJIT reconstruction technique with data from the front segments of detectors 3, 4, 5, and 6. Two compact footpoints are evident in the 25 - 50 keV image with the extended coronal source present at both energies but at a higher altitude in the higher energy image.

We used the following method to estimate the length of the coronal loop source in order to minimize the effect of the footpoint emission. First, we defined an arc along the spine of the loop structure that also passed through the two footpoints. To accommodate the change in source location with energy shown in Figure 3, the arcs for each energy bin were moved to always pass through the pixel with peak emission. The resulting intensity plots along the arcs at each energy are shown in Figure 4. They were fitted with multiple Gaussians and the full width at 75%, 50%, and 20% of the peak was determined. Again, this was to minimize the effects of the footpoint emission, evident at the higher energies, on the estimate of the length of the coronal part of the source. 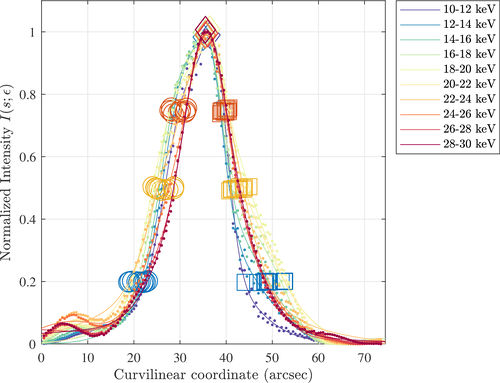 Figure 4: Normalized X-ray intensity vs. distance measured along the loop spine that passes through the coronal source peak location at each energy Color-coded points for each energy show the intensities at each pixel along the arc in the image. The curves are the sum of the minimum number of Gaussians needed to adequately fit the data points. For each energy range, the diamonds show the location of the peak intensity; the circles and squares show the left and right location, respectively, at a given fraction of the peak intensity, with blue at 20%, orange at 50%, and red at 75%.

The source lengths defined in this way are plotted vs. energy in Figure 5 for the three different measures of the length. The change in position of the peak is plotted in Figure 6 vs. energy. In each case, the change in length (ΔL) and in distance (ΔD) between 10 and 20 keV and between 20 and 30 keV are indicated in arcsec. For this time interval, the source length clearly decreased with increasing energy between 20 and 30 keV, contrary to the previously reported result where the measured length increased with energy. The X-ray emission in this energy range was originally thought to be nonthermal given the assumed isothermal function used for the spectral fits. The more likely multi-temperature function used for the fit shown in Figure 2 suggests that there is still considerable thermal/nonthermal overlap in this energy range with the crossover energy at ~22 keV. 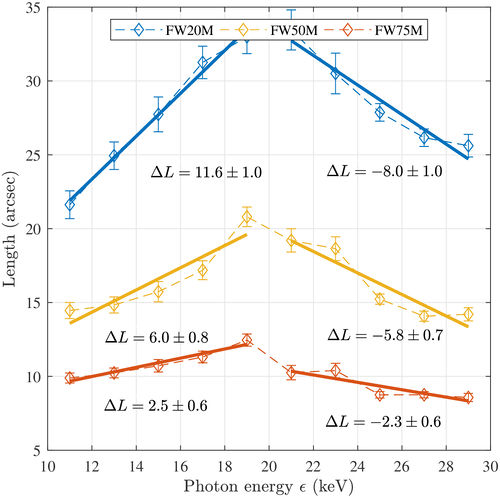 Figure 5: Coronal source length measured along the loop spine plotted vs. photon energy. The lengths ΔL were determined as the distances between the positions at which the intensity along the arc dropped to 75% (blue), 50% (orange), and 20% (red) of the peak value in each energy bin. The Solid lines indicate the best fit to the data points from 10 to 20 keV and from 20 to 30 keV. The changes in length (ΔL) over these two energy ranges are shown on the plot. 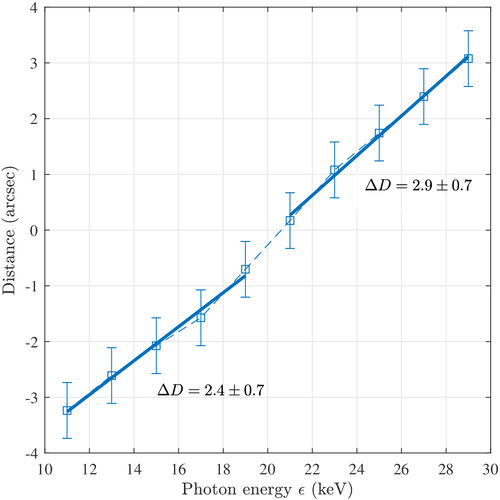 Figure 6: Energy dependence of the distance, ΔD, between the peak in coronal flux in the 20-22 keV image and the peak at other energies. The solid lines show linear fits to the data points from 10 to 20 keV and 20 to 30 keV, and the indicated values of ΔD are the changes in position in arcsec over the two energy ranges. 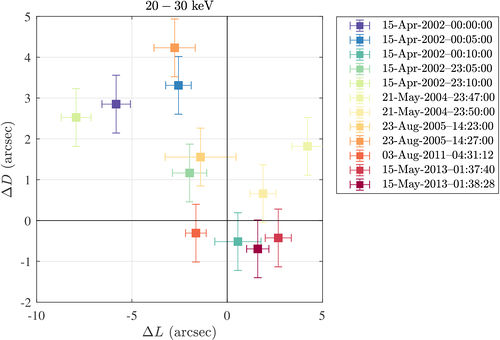 Figure 7: Changes in position (ΔD) and length (ΔL measured at 50% of the peak intensity) between 20 and 30 keV for the coronal sources for the 6 flares and 12 time intervals used in the study.

We carried out the same type of analysis of all flares previously analyzed as primarily coronal hard X-ray sources. This constituted 13 flares with a total of 26 time intervals. We eliminated some of these events since we could not be sure for various reasons that the available information was consistent with such a dense loop model. This left just 6 flares and 12 time intervals where we could be reasonably sure that we were getting a reliable measure of the coronal source length as a function of energy. Values of the change in position (ΔD) are plotted in Figure 7 vs. the change in source length (ΔL) for all 12 time intervals between 20 and 30 keV. The change in length ranges between +5 to -8 arcsec but with an average decrease of 1 arcsec and a standard deviation of 3.5 arcsec. In no case is it as large as the >10 arcsec as previously reported Ref. [2], {3], [4], [5], and [6]).

The change in position of the peak between 20 and 30 keV ranges between -0.7 and +4.2 arcsec. Given the location of the flares on the solar disc, this is always consistent with either no change or an increase in altitude. Correcting for the foreshortening effect close to the limb, the source altitudes averaged 20 Mm with a scatter deviation of 9 Mm. Also, we could determine the height of the source above an assumed vertical semicircular loop between the footpoints. This averaged 10 Mm with a scatter deviation of 7 Mm. If the source emission is thermal, this altitude location and variation with energy is consistent with the standard CHSKP flare model in which magnetic reconnection in a coronal current sheet results in new hot loops being formed at progressively higher altitudes. The explanation for the nonthermal emission remains unclear and will require further work.