Solar flares are complexes of energy release episodes of different power, duration and frequency occurrence. This often appears as pulsations (multiple bursts, spikes or peaks) visible over broad wavelength ranges, from radio up to hard X-rays (HXR), and even up to gamma-ray emission. Such phenomena have been discussed in earlier Nuggets, such as the entries on spikes, X-rays and H-alpha, decimeter waves, as fractals, elementary flare bursts, coronal HXR sources, and others Sometimes the pulsations reveal the intriguing property of quasi-periodicity, when times between successive pulsations do not differ too much from each other. In this case, Fourier spectra or wavelet spectra of flare emission light curves contain significant spectral peaks. Such pulsations are often called "quasi-periodic pulsations" (QPPs). The nature of the QPPs is actively debated, for example in previous RHESSI Nuggets introducing QPPs, discussing harmonic oscillations, finding QPPs in flares, even in simple ones, associated with implosions, possibly triggered by slow waves, and in Fermi/GBM gamma-ray data.

A number of models/ideas have been proposed to explain the flare pulsations and QPPs (see another earlier Nugget). Models based on MHD oscillations of coronal loops are especially popular. However, it seems that the amount of observational data with high spatial resolution, is currently not enough yet to make a reliable choice between the existing models or to develop better new ones. The majority of previous observational works on the flare pulsations was individual case studies, which makes generalization difficult. The goal of the present work is to perform systematic analysis of spatio-temporal evolution of sources of the HXR pulsations in a large set of flares observed with RHESSI between 2002 and 2015. We emphasize that our study is not accented on the finding and analysis of the quasi-periodicities. Our approach is more general. We are interested in all flares which are accompanied by multiple HRX pulsations/peaks seen in the RHESSI data, no matter whether they are quasi-periodic (in the above sense) or not.

Using the RHESSI observations (2002-2015) we selected solar flares showing pulsations of HXR emission in the 50-100 keV range. The major criterion for flare selection was the presence of at least four successive HXR peaks in the impulsive phase, as judged subjectively during visual inspection of the RHESSI 50-100 keV count rates available through the RHESSI Browser. We think it obvious that fewer peaks in a flare light curve should not be classified as a "pulsation". In this way we initially found 154 flares. However, the final event list consists of only 29 flares, after rejection of events subjectively, but often to not having sufficient data quality for our analysis (e.g., only a part of a flare impulsive phase was detected by RHESSI, the presence of a high background in the data, a weak flux of HXRs not enough for high quality image synthesis, unfavorable flare location very close to the limb, etc.).

For each selected flare we automated the procedure of local maxima/minima identification in the RHESSI four-second background-subtracted corrected count rates in the 50-100 keV range. Maxima/minima correspond to peaks/valleys of HXR pulsations. For further analysis, we used only those peaks whose amplitudes, i.e. the maximal difference between a local maximum and its preceding and succeeding minima, exceeded three standard deviations of the pre-flare background. We assumed such peaks to be real, significant pulsations of flare HXR emission. Other peaks could be artifacts. As an example, Fig. 1 shows background-subtracted corrected count rates in the 50-100 keV channel with all identified peaks for two representative flares: 6 (SOL2002-11-09T13:08; see also [1]) and 4 (SOL2002-08-20T08:22) from our sample of events.

Figure 1: RHESSI count rates in the 50-100 keV range for two flares from our event list. The vertical dashed/dotted lines indicate identified significant local emission maxima/minima. Colored horizontal segments above indicate time intervals of the separate pulsations for which we could synthesize HXR images of good quality used for further analysis of the spatio-temporal evolution of the HXR sources (Figure 2).

After we identified significant HXR peaks in all selected flares we synthesized images of the HXR sources of the identified peaks and performed analysis of the spatio-temporal dynamics (evolution) of these HXR sources from one peak to another. Since the magnetic field plays a crucial role in flares, we superposed contours of the HXR sources of each identified significant peak on pre-flare magnetograms obtained with the SOHO/MDI or SDO/HMI instruments. This enabled us to relate the pulsation sources to the all-important magnetic polarity inversion line (PIL).

Additionally, we checked whether the investigated flares were accompanied by coronal mass ejections (CMEs) or not. We found that the majority of our flares (24/29, or 83%) were definitely accompanied by CMEs and, thus, were eruptive events. Others of the remaining five flares might also have been eruptive in other forms.

This analysis systematically revealed that the sources of pulsations were not fixed in position. The spatial location of the sources changed from one peak to another. This means that different pulsations were not emitted from footpoints of one flare loop but rather from footpoints of different loops. Obtaining this result for all 29 events, we could subdivide them into two groups.

Group 1 consists of flares with specific systematic dynamics of the HXR sources. In such events, there is a tendency of the HXR sources to move along some specific directions from one pulsation to another, e.g., along or perpendicular to the PIL, and having quite simple elongated trace on the photosphere. For the majority of the significant pulsations it was possible to identify paired HXR sources situated in opposite magnetic polarities. One can interpret these sources as the locations of energetic electron injections in the opposite footpoints of different flaring loops.

Group 2 consists of flares with more random dynamics of the sources of HXR pulsations. In the parent active regions we could identify several PILs with more complicated geometrical configurations. As an example, Figure 2 shows maps of the spatio-temporal evolution of the sources of pulsations for one event from the group-1 (Event No. 6) and one group-2 event (Event No. 4). Different colors of the HXR contours correspond to different HXR pulsations shown on Figure 1.

Figure 2: Examples of the spatio-temporal evolution of the sources of the HXR pulsations in group-1 (No. 6, left) and the group-2 (No. 4, right). The background images are the SOHO/MDI pre-flare photospheric line-of-sight magnetograms. The color palettes of magnetic field (in gauss) are shown in the bottom. Color contours show position of the sources of different HXR pulsations. The times of these pulsations are indicated right from the images and correspond to the color horizontal segments on Fig.1. Levels of the contours (percentage from the maximal values of the HXR sources for each pulsation) are shown on the images. Straight color lines (left) connect paired HXR sources situated in the regions of opposite magnetic polarities. The PILs are shown by the white curves.

Two main results of our systematic analysis of large set of solar flares with HXR pulsations are:

1) The sources of HXR pulsations in all studied flares were not persistent: the spatial locations of the HXR sources changed in time from one pulsation peak to another;

2) The majority of flares (83%) were associated with CMEs and, thus, were eruptive events, i.e. were accompanied by eruptive processes - sudden ejections of filaments and/or magnetic structures such as magnetic flux ropes and arcades of magnetic loops.

We think that these two results are interrelated, namely, the HXR pulsations are a consequence of the eruptive processes. This interpretation can be implemented both to the Group 1 and Group 2 flares, since eruptions can occur in flaring ARs with different magnetic morphologies, not necessary of the bipolar type only. For illustration of this concept (see an earlier Nugget and Ref. [1]) we have made the cartoon shown in Figure 3. Reference [2] explains how the process can form the flux rope shown in the cartoon. 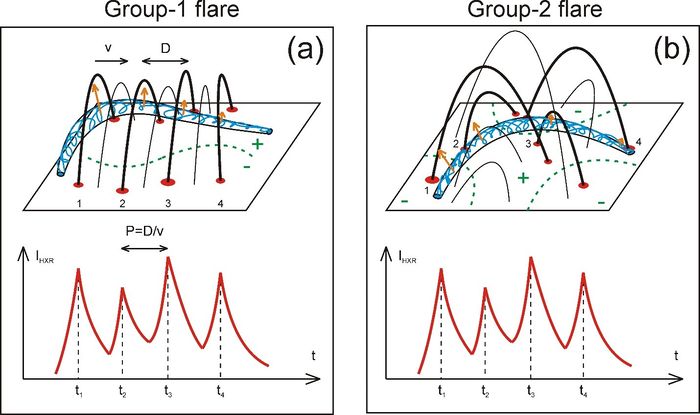 Figure 3: Cartoon of the possible interpretation of the observational results for the Group 1 (a) and Group 2 (b) flares accompanied by HXR pulsations. Flaring loops corresponding to local maxima/minima of energy release rate are depicted by black thick/thin arcs. Sources of the most intensive HXR pulsations are shown by red circles. Erupting magnetic flux rope is shown by blue spiral structure. Magnetic inversion lines are the green dashed curves. Orange arrows show local velocity vectors of the erupting flux rope; length of these arrows characterize the velocity amplitude. The bottom panels illustrate the resulting light curves of flare HXR emission with a sequence of HXR pulsations.

The discussed concept of the flare energy release does not require the presence of oscillatory processes (such as MHD waves, oscillations of coronal loops, etc.), which are often used to construct the models of flaring pulsations, in particular, the widely used oscillating magnetic trap model. The apparent motion of hard X-ray footpoints has been widely discussed, for example in previous Nuggets on elementary flare bursts and two ribbon flares. In our view, the crucial role in generation of pulsations, as well as in excitation of coronal loops oscillations (see, e.g., Ref. [3]), is played by unstable eruptive magnetic structures.

In the end of the discussion, we would like to touch the question on the quasi-periodicity of the HXR pulsations. In the frames of the discussed concept the time between successive pulsations (marked by P on Fig.3) is defined as the rate of involvement of new magnetic elements of a parental AR to the flare process: P=D/v, where D is the distance between neighbor flaring magnetic elements, v - the trigger velocity of the flare energy release (i.e. a flux rope). In the case of the presence of the quasi-periodicity in a flare light curve, P=const for successive HXR peaks and the ratio D/v=const, i.e. it is some kind of quasi-invariant for a given flare. This, in particular, could be in the case, when the distances between different neighbor magnetic flaring elements are almost equal (D=const) to each other and the velocity of the flare trigger is almost constant (v=const). Evidently, such situation is not very often, because flaring ARs and magnetic flux ropes usually have quite complex and inhomogeneous structure. Possibly, this may explain not very frequent occurrence of the quasi-periodicity of pulsations in flares (e.g., see an earlier Nugget).

A large sample of solar flares with HXR pulsations observed with RHESSI in 2002-2015 (the majority of the events were eruptive ones) has shown that the observed pulsations do not come from a single flare loop. Instead, different loops appear at different times, changing the hard X-ray source from one location to another.

This finding encourages theories involving the interaction of 3D eruptive structures with inhomogeneous ambient magnetized plasmas. The quasi-periodicity of pulsations in some events could also be interpreted as the consequence of a steady rate of involvement of new magnetic elements in the process of flare energy release process. See further discussion of these ideas in Ref. [4].

Notes on the Icon image

It's a deflagration wave in a forest fire. Is this a good analogy for a solar flare?

[2] "Formation and eruption of solar prominences"